Scotland is enjoying its most sustained period of economic growth in three years, according to the EY Scottish ITEM Club.

The report, published today, suggests that the improved picture is underpinned by increased consumer confidence and a greater willingness to spend, but warns that this must be supplemented by exports and investment to remain sustainable.

"Scotland's economy is set to benefit from a surprise upsurge in consumer confidence this year, heralding a return to the peak level achieved prior to the financial crisis. However, the forecast is predicated on the recovery spreading from the consumer sector into investment and exports."

The report notes that all major parts of Scotland's private sector – including manufacturing and construction – contributed to growth over the past year. Furthermore, the public sector is expected to achieve output growth despite the continued climate of austerity.

Distribution, hotels and catering, transport, storage, communication and government services are highlighted as sectors underperforming their peers in the rest of the UK.

The total number of people with jobs in Scotland has increased by 2.6% over the year, outstripping UK growth of 0.7%. The rise in employment has pushed the overall employment rate up to 72.8%, putting 40,000 more people back into work.

What's more, this has resulted in the unemployment rate falling by 0.9 percentage points to 7.2% – the UK rate dipped by 0.2% during the comparable period.

"The return to growth in manufacturing after two years in the doldrums is particularly encouraging, as is the revival of the construction industry following the sharp setback suffered in 2010. Employment is also now firmly on an upward path, but this remains dependent on the performance of private services, particularly the fast growing professional, scientific and technical services segment." 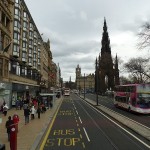 Total investment spending in Scotland is yet to respond to the consumer driven improvements in growth, but it continues to make a bigger contribution to Scotland's economy than in the rest of the UK, the report notes.

Exports remain a concern, though, with the EY Scottish ITEM highlighting that overseas exports are stagnant, showing no growth over the past two years.

"The figures are of great encouragement, but the home grown recovery requires deeper roots; it would be remiss to rely purely on a consumer-led resurgence. With the EY Scottish ITEM Club predicting that Scottish spenders are set to be less gung-ho next year, investing in growth and improved export performance remain the keys to sustaining the recovery from here."

And What of the Referendum?

The EY Scottish ITEM Club believes that it is unlikely that the debate surrounding next year's referendum on independence has had any noticeable impact – positive or negative – on Scotland's economic performance.

"Uncertainty in relation to the outcome of the referendum could encourage a wait-and-see attitude to develop among business leaders in relation to capital spend and hiring decisions, but at present there are no signs that it is being viewed as a greater risk than any other factor, at home or globally."