F&F, the clothing brand owned by Tesco, has announced its first franchise stores in Europe with store openings in Switzerland and Gibraltar.

In partnership with Coop, Switzerland's second biggest retailer, F&F have recently opened seven new stores in the Zurich area with plans to open more stores across the country in the future. F&F are offering Swiss customers a new choice of affordable fashion within Coop's hypermarket stores, whilst complementing existing ranges by offering fantastic value in its Coop City department stores.

F&F has also recently opened two stores in Gibraltar, in conjunction with franchise partner Pisa International. The two stores, which include the first F&F Kids store, enjoyed record sales after they opened to the public last week.

F&F opened its first franchise stores in Saudi Arabia in May 2012. The new store openings in Europe follow successful franchise agreements in Central Asia and across the Middle East, and bring F&F's franchise stores to a total of 32 with more planned in the coming months.

Jason Tarry, Chief Executive of F&F said: "F&F has performed really strongly over the last twelve months, so we're delighted to announce these new franchise agreements in Switzerland and Gibraltar, our first franchise stores in Europe. These partnerships enable us to operate in markets we don't already have a presence in and benefit from the local expertise of our franchise partners. We now have more than 30 franchise stores internationally and we'll be looking to open even more in the coming months to help grow the F&F brand and offer it to even more customers." 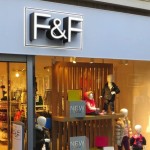 Peter Hauser, Director of Coop said: "Swiss customers demand great value, high quality, ethically sourced products, so we're excited to have the opportunity to work with F&F and with Tesco. F&F is an excellent addition to the already strong fashion ranges available within Coop and Coop City stores and we're delighted with the performance of the new stores so far. Customer feedback has been really positive and we're looking forward to opening our next department store in Zug shortly."

Frank Hernandez, CEO of Pisa International said: "With the strong links between the UK and Gibraltar, F&F is already a recognised brand in Gibraltar. Both stores had record breaking openings and we are delighted to have opened the first F&F Kids store anywhere in the world. We have had some great customer feedback, particularly about the outstanding value and high quality of the F&F products. We look forward to expanding the business with the F&F team and offering customers in Gibraltar a great brand for years to come".

In the UK F&F sales exceeded over £1 billion last year and increased by nine per cent.

7 Myths All Chiropractors Need to Debunk to Serve More Patients