On the 20th of December at the 42nd Mercosur Summit the decision was taken by Mercosur members to ban Falkland Island flagged ships from the trading bloc's ports. The move continues the dispute between Argentina and Britain over the status of the Falkland Islands, which Argentina continues to claim and refer to as the Malvinas.

As a result the UK Prime Minister issued a statement of full support for the islanders just before Christmas on 23rd December saying 'Whatever challenges we face in the UK, the British Government's commitment to the security and prosperity of the overseas territories, including the Falklands, remains undiminished.'

He also called these attempts by Argentina to disrupt shipping links to the Falklands as 'unjustified and unproductive'.

There are four full members of the Mercosur trading bloc: Argentina, Brazil, Paraguay and Uruguay. With a fifth country, Venezuela, waiting to become a fully ratified member. There are also another five associate members: Bolivia, Chile, Colombia, Ecuador and Peru.

As Chile is reported by the People's Daily Online that it and other associate members would support the ban that just seems to leave Suriname, French Guiana and Guyana. Although it does also leave the landlocked countries of Bolivia and Paraguay in the clear.

The British Ambassador to Chile, Jon Benjamin, is quoted in the Buenos Aires Herald as expressing concern over the '…economic blockade on the islands and the small civil and innocent population that lives there'. 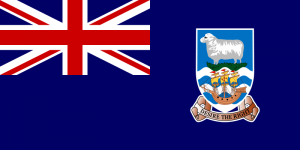 Flag of the Falkland Islands

Luis Almagro, the Uruguayan Foreign Minister has said after a lengthy telephone call with his UK counterpart, William Hague, that this has not started some sort of diplomatic disaster with Britain and that it was the country's position not a personal dispute between politicians. He went on to say that "Except for Malvinas, we have a very good dialogue with the UK".

There are claims that oil exploration by British companies in the area and the intent to post Prince William there in his capacity as an RAF officer have caused the ruckus.