Since the restart of oil exploration in the South Atlantic around the Falkland Islands, the Argentine government has increased its protests against British sovereignty of the islands as well as attempting to disrupt shipping in the area.

This has prompted the islanders to look at increasing their self sufficiency so as to limit their reliance on imports. For example it has been assessed that 64% of the fresh fruit imported could be grown locally.

Now a new conservation area that is due to be set up around the British Overseas Territories of South Georgia and the South Sandwich Islands has been condemned by Argentina says the Express. One of the sparks that started the 1982 Falklands war was the civilian occupation of South Georgia on 19th March that year. South Georgia was retaken shortly afterwards on 26th April when the Argentine commander there surrendered his force of 130 plus men. 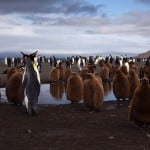 The new conservation area consists of 386,000 square miles of the South Atlantic, which has featured in Sir David Attenborough’s ‘Frozen Planet’, has been branded by Argentina as ‘a new and completely illegitimate colonialist action’.

Argentinian politician Alfredo Atanasof said that it was an ‘abusive advance of the UK government to create a natural habitat for penguins, seals and whales in our islands’.

Conservative MP Andrew Rosindell is quoted in the Express as saying he is ‘concerned’ over the Argentine president, Christina Kirchener ‘clearly ratcheting things up’. He said that Britain must remain alert.