The Sophomore Slump: a dozen or so years since Grandaddy made a joke of it in the title of their own ‘difficult second album’ and still we can barely move for it, The Ting Tings becoming the latest recipients of this most unwanted tag. Thing is, as Grandaddy proved with one of the finest records produced this century, not all second albums are beset with problems.

It helps when you begin from a modest base, of course, and in this respect London-based Fanfarlo are handily placed, their debut record ‘Reservoir’ having reached respectable altitude without ever threatening to go all Icarus on us. If ‘Rooms Filled With Light’s three year gestation period suggests that the act of bettering this achievement second time around was ever under threat, then you wouldn’t really know it from the end result.

Compared with their first record, everything feels as if it has been turned up a notch and they have learned to trade heavily on their most tradable asset – the angular, late-developer song that swells and blossoms into a cracker. The distant, choppy violin of opener ‘Replicate’ gives way to a stately chorus and new single ‘Shiny Things’ sees an unlikely synth-powered sing-along grow from particularly stony beginnings. On ‘Bones’, the ice cream van-style glockenspiel is fused into a downtempo beat that wouldn’t look entirely out of place on a mid-90’s triphop record.

Fanfarlo’s fondness for throwing every percussive instrument they own at their records betrays an innocence that it is difficult not to find hugely endearing. ‘Deconstruction’ is a multi-layered chunk of pop loveliness, with its insistent beats urgent rhythm section and incongruous trumpet interlude. In more cynical hands, ‘Lenslife’ would be an arch swipe at the apparent need for people to document every mundane aspect of their lives, rather than the hymn to personal experience it becomes.

Standout track ‘Tightrope’ could be the work of a less uptight Arcade Fire and clarinet-heavy ‘Tunguska’ is as playful and energetic as befits a song about an explosion triggered by a comet. Oh, and if celebrity trowel-wielder Tony Robinson is ever looking for a new theme tune for Time Team, then he could do a lot worse than opt for ‘Dig’, which bridges one of the many missing links between Guillemots and Stereolab.

If there is a fault in ‘Rooms Filled With Light’, it is that it is lacking in some direction, songs often tailing off when they should be gathering momentum and the record’s centrepiece rather wasted on the film score tinkling of ‘Everything Turns’. When a band possesses such talent, it seems perverse to demand less music. However, it is the curbing of their natural tendency toward the whimsical and the overlong which would elevate ‘Rooms Filled With Light’ from very good to something rather special.

For now, though, let us be content that Fanfarlo are getting better with each record. Not everyone can say likewise. 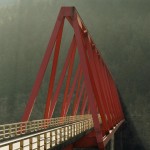 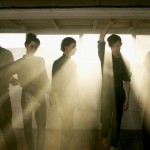