Commercial banks and savings institutions insured by the Federal Deposit Insurance Corporation (FDIC) reported aggregate net income of $40.8 billion in the fourth quarter of 2015, up $4.4 billion (11.9 percent) from earnings of $36.5 billion a year earlier. The increase in earnings was mainly attributable to a $6.8 billion increase in net operating revenue and a $2.7 billion decline in noninterest expenses. The reduction in noninterest expenses is attributed to a drop in litigation expenses at a few large banks. Financial results for the fourth quarter of 2015 and the full year are included in the FDIC’s latest Quarterly Banking Profile released today.

Of the 6,182 insured institutions reporting fourth quarter financial results, more than half (56.6 percent) reported year-over-year growth in quarterly earnings. The proportion of banks that were unprofitable in the fourth quarter fell from 9.9 percent a year earlier to 9.1 percent, the lowest level for a fourth quarter since 1996. . 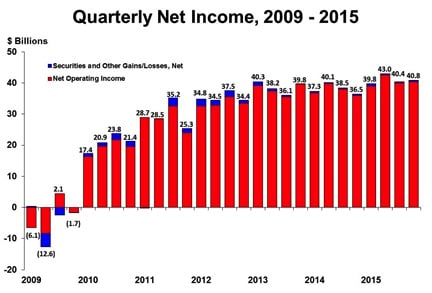 “Revenue and income were up from the previous year, overall asset quality continued to improve, loan balances increased, and there were fewer banks on the problem list,” Gruenberg said. “However, banks are operating in a challenging environment. Revenue growth continues to be held back by narrow interest margins. Many institutions are reaching for yield, given the competition for borrowers and low interest rates. And there are signs of growing credit risk, particularly among loans related to energy and agriculture.”

Net Operating Revenue of $174.3 Billion Is 4 Percent Higher Than a Year Ago: Loan growth helped lift revenue at most banks, as net interest income rose $3.9 billion (3.6 percent) compared to the fourth quarter of 2014.  Noninterest income was $3.0 billion (5 percent) higher, as servicing income rose $2.1 billion (178 percent) and gains on asset sales increased by $984 million (32 percent). Total net operating revenue was 4.1 percent higher than a year ago.

Deposit Insurance Fund (DIF) Rises $2.5 Billion to $72.6 Billion: The DIF increased from $70.1 billion in the third quarter to $72.6 billion in the fourth quarter, largely driven by $2.2 billion in assessment income. The DIF reserve ratio rose from 1.09 percent to 1.11 percent during the quarter.

Find a fuel price protest near you!