• Quarterly Net Income Is 12.7 Percent Higher than a Year Earlier

• Community Bank Net Income Rises 10.4 Percent from a Year Ago

Commercial banks and savings institutions insured by the Federal Deposit Insurance Corporation (FDIC) reported aggregate net income of $44 billion in the first quarter of 2017, up $5 billion (12.7 percent) from a year earlier. The increase in earnings was mainly attributable to an $8.8 billion (7.8 percent) increase in net interest income and a $2.1 billion (3.4 percent) increase in noninterest income. Financial results for the first quarter of 2017 are included in the FDIC's latest Quarterly Banking Profile released today.

Of the 5,856 insured institutions reporting first quarter financial results, 57 percent reported year-over-year growth in quarterly earnings. The proportion of banks that were unprofitable in the first quarter fell to 4.1 percent from 5.1 percent a year earlier. 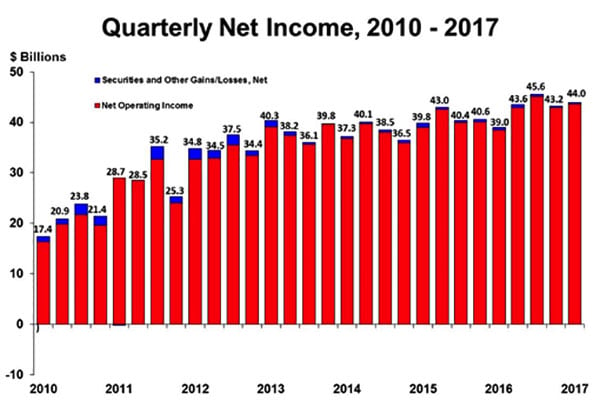 Gruenberg continued: "In the past two quarters, the industry has seen a slowdown in loan growth that is broad-based across major lending categories. This slowdown has occurred as the economy approaches the end of the eighth year of a relatively modest expansion. Still, loan growth has remained at or above nominal GDP growth.

"Low interest rates for an extended period and a competitive lending environment have led some institutions to reach for yield. This has led to heightened exposure to interest-rate risk, liquidity risk, and credit risk. Banks must manage these risks prudently to maintain growth on a long-run, sustainable path."

Quarterly Industry Net Income is 12.7 Percent Higher than a Year Earlier: Quarterly earnings were 12.7 percent higher than in the first quarter of 2016 due to growth in net operating revenue. Net operating revenue – the sum of net interest income and total noninterest income – was $183.6 billion, an increase of $10.9 billion (6.3 percent) from a year earlier. Loan-loss provisions totaled $12 billion, a decline of $541 million (4.3 percent) compared to first quarter 2016. Noninterest expenses of $109.2 billion were $4.5 billion (4.3 percent) higher than a year earlier, as a 2 percent year-over-year increase in employment was reflected in higher payroll expenses. The improvement in revenue also caused the average return on assets to rise to 1.04 percent from 0.97 percent a year earlier.

Annual Loan Growth Rate Slows to 4 Percent: Total loan and lease balances increased $358.1 billion (4 percent) during the 12 months ended March 31, compared with a 5.3 percent growth rate over the 12 months ending in March 2016. The slowdown in loan growth occurred across all major loan categories. During the first three months of 2017, total loan balances declined by $8.1 billion (0.1 percent) from the fourth quarter, as borrowers reduced their credit card balances by $43.7 billion (5.5 percent). Community banks increased their loan balances by $16.7 billion (1.1 percent) during the quarter and by $109.9 billion (7.7 percent) over the past 12 months. Still, loan growth has remained at or above nominal GDP growth.

The YO! Burger Flies In