As the slowdown in China contiunes many are questioning whether the country is heading towards a financial crisis. In his latest Economic viewpoint Craig Botham, Emerging Markets Economist at Schroders, discusses this possibility and shares his views on his current outlook for China.

China’s slowdown in growth has prompted many to ask whether government stimulus might be around the corner. The National People’s Congress (the national legislature) met and announced a series of targets earlier this month, setting the growth target once again at 7.5%. This would certainly seem to suggest stimulus will be needed. However, Premier Li Keqiang has said there is flexibility around the target, and Finance Minister Lou Jiwei has reportedly said growth of 7.2% would be sufficient. Both said that jobs are more important than growth, so watch employment for indications of stimulus; the labour market is currently quite tight. However, Premier Li has said China will speed up investment and construction to ensure stable expansion of demand – we will have to wait and see how (and if) this is achieved.

We had expected the tighter monetary conditions seen late last year and running into 2014 to have a negative impact on growth, reflected in our bearish growth forecast. Provided credit continues to tighten we would expect more of the same, and certainly all the noises from the authorities support this. Total social financing (TSF) data so far this year might make it look as though a new credit boom is occurring, particularly given the high level seen in January, but the growth rate continues to slow, and in February TSF actually fell in year on year terms. We expect a continued squeeze on credit, particularly shadow financing, and by extension continued problems for investment.

Of course, monetary conditions at the moment look less tight; the interbank rate has dropped sharply having climbed throughout the second half of last year. However, this reflects FX intervention by the People’s Bank of China (PBoC) to weaken the currency and should not be read as a sign of monetary easing aimed at propping up growth. This intervention was aimed instead at introducing more two-way volatility into the yuan-dollar (CNYUSD) exchange rate. Since 2005, the yuan has appreciated about 35% against the dollar, steadily appreciating or stable for the entire period. Given the interest differential between the yuan and the dollar, this led to considerable funds flowing into the currency to exploit the carry trade. In turn, this provided a massive source of liquidity to the Chinese economy that was not under central bank control. Though the PBoC has not said it is deliberately engineering the recent weakness, there have been reports of large scale dollar purchases by the PBoC, and it seems likely it is trying to squeeze out these carry trade investors and so regain control over credit provision.

How does this relate to the lower interbank rates? In order to buy dollars the PBoC must sell yuan, essentially injecting large amounts of CNY liquidity onto the market in the process. We consequently expect rates to begin rising again once the PBoC is comfortable that the carry trade has been sufficiently suppressed. Equally, the currency should continue to appreciate this year, but at a more moderate pace and with greater volatility than in the past.

Scuffles in the shadows 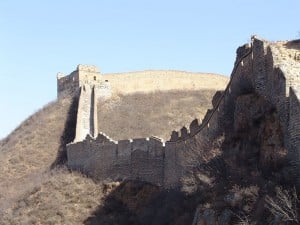 This is not the only problem the monetary authorities are attempting to manage. A number of trust products have defaulted (and been bailed out) this year, and more recently we saw China’s first domestic bond default, and now market focus is on a Chinese real estate developer unable to repay its $565mn in debt (mainly bank loans). All of this has given fresh impetus to concerns that a Chinese financial crisis is imminent.

Broker estimates put the shadow banking sector at around 63% of GDP at the end of 2013, and RMB 3-5tn of trust products are thought to be up for redemption this year, along with RMB2tn of corporate bonds. These numbers are large historically, as well as in absolute terms, and further defaults seem likely. Close to 30% of trust products invest in mining and other “basic industry” sectors, and another 9% in property. Given the overcapacity issues in China and the weaker data seen in the housing market (discussed above), again, more defaults seem likely.

The question, then, is whether these defaults will be enough to spark a financial crisis. So far, trust product defaults have been bailed out to some extent (the government has recently been imposing some losses on investors), and the corporate bond default was small and flagged in advance – the issuer having been downgraded to CCC last year. But if a trust product were allowed to default completely, could we see a crisis? Trust companies themselves are unable to create money, and have little to no securitisation and low leverage. A trust company failing, therefore, has limited direct impact on the financial system. The main concern is its impact on confidence, a full default could lead to a panicked rush out of the shadow financing system and a credit crunch.

This, though, presupposes that defaults go unchecked. It seems extremely unlikely to us that the authorities will permit a large scale default in the near future. Though the imposition of minor losses in recent trust default cases shows a willingness to move in this direction, we expect a very gradual approach will be adopted to accustom Chinese investors to the concept of moral hazard. There is also a reputational risk; 84% of trust companies are backed by governments and large financial institutions. Default by such a trust risks nurturing the idea that the government or bank associated with the product is also bankrupt, a loss of confidence of that kind would be devastating. We think it is more likely that the government will continue to bail out trust products, imposing some losses on investors (so returning the principal but not interest payments) and potentially letting smaller products, particularly those offered by independent trust companies, default completely. It is important that moral hazard be managed and reduced but there is no desire to precipitate a crisis. Of course, this could be storing up more pain for the long run, but the authorities seem willing to take that chance for now.

Renting vs Buying: Knowing the Pros and Cons