♥ Unfaithful men plan to see their mistress on February 13

♥ Wives more likely to get a meal out

It won't appear on the family calendar, but February 13 is 'Mistress Day' for unfaithful British men and their affair partners.

New statistics from AshleyMadison.com reveals that 71% of British men plan to see their mistress on February 13, leaving Valentine's Day itself free for a date with their wives. For 42%, a hotel is booked for Thursday the 13th and 35% will be taking their lover to the pub for a night out – before returning home to their wife.

On Valentine's Day itself, 60% of cheating men plan to take their wives out for a meal, but only 2% will take their wife to the pub.

The survey of 3853 actively unfaithful men also shows that when it comes to Valentine's gifts, wives will lose out. Of the men polled, 55% plan to spend under £100 on their wife while 81% will spend £100 – £300 or more on their mistress. Traditional diamond jewellery and lingerie are still the most popular gifts for mistresses, flowers or perfume for wives.

Red and White Roses by Janine

'Valentine's Day has always been associated with secrecy around love affairs, it's a key time for infidelity,' says Christoph Kramer, an expert on infidelity and AshleyMadison.com European Communications Director. 'Of course men spend more on their mistresses, they're out to impress. That goes for the mates down the pub too!'

About Ashley Madison AshleyMadison.com was founded by CEO Noel Biderman in Canada in 2002, a new social network that is the second fastest growing in the world after Facebook. Currently the site has over 20 million users in 30 countries including 952,698 in the UK.

Where to celebrate Valentine's Day/Mistress Day? 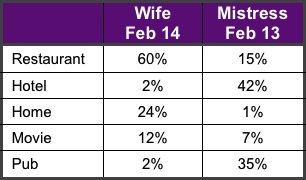 Sugar consumption having a 'devastating' effect on all of our dental health, claims charity

10 Improvements To Make To Your House This Year