Since the beginning of the year, key stock indices have fallen, and this is making investors nervous. They are asking what will happen next. The first month of the year is usually good for the stock market, but that wasn’t the case this year. The S&P 500 fell more than three percent and other key stock indices showed the same, if not worse, returns.

Will there be a sell-off in February as well?

Will the S&P 500 rise in February after declining in January?

Dear reader, remember that this information is from the past; market returns today can be completely different. You shouldn’t rely on historical facts alone when creating an investment strategy. You have to keep in mind that the stock market is a forward-looking animal, meaning investors try to price future information based on the present. And that means fundamental factors do matter.

On that front, here’s what you need to know…

We see investors are losing trust in the stock market. One of the reasons for this can be blamed on the emerging markets, where each day there’s a new development that threatens the conditions in the global economy, the U.S. economy, and, at the very core, the corporate earnings of companies—which is the main driver of the stock market. 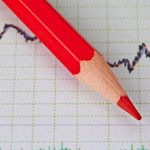 Another reason for declining investor sentiment is the weakening of the U.S. economy. It seems manufacturing activity, which is ultimately an indicator of consumer demand, is slowing down. The Institute for Supply Management’s (ISM) Purchasing Managers’ Index (PMI) declined from 56.5 in December to 51.3 in January. (Source: “January 2014 Manufacturing ISM Report On Business,” Institute for Supply Management web site, February 3, 2014.) Although any number above 50 on the PMI signals an expansion in manufacturing activity, the decline still suggests that demand is cooling.

My take? Looking at the fundamental factors and what has happened since the beginning of the year, I expect the stock market to see a rough road ahead. If we hear more bad news from the emerging markets and the U.S. economy continues slowing down, then the sell-off could be far steeper than what we have seen so far.

As key stock indices decline from their 2013 highs and risks are increasing; I continue to keep the same belief: take profits off the table and raise cash. Opportunities are in the making. Just look at the big-cap companies; some of them are getting punished for no apparent reason whatsoever. If you decide to buy in this market, be cautious and diligent in your research; this is a market full of mounting risks.

This article February to Be a Repeat of January’s Market Losses? by Mohammad Zulfiqar, BA was originally published at Daily Gains Letter.

The Economic Effects of Online Gaming