Much Ado About Nothing? … New Research Shows Fewer Than 2,000 Homes Were Purchased By Foreigners In Central London Last Year.

Foreign investors are dominating more than London’s property market as they once again become the focus of both the Government and the headlines. MP Simon Hughes started the ball rolling, condemning international buyers and calling for law changes preventing them from purchasing London residential property. A report by LPP came next; breaking the news that an unprecedented 85% of London’s prime core was purchased by foreigners last year.

London is a financial centre, a ‘go-to’ destination, a pinnacle of culture and a centre of excellence and, as both Mr Hughes and LPP point out, the international appetite for properties here is vast. However, these headline grabbing statistics and provocative sound bites belie the tenure of housing stock in Prime London Central (PLC)*, which might surprise:

With only 5,363 units changing hands in the last year, PLC is arguably the greatest capital city in the world with the lowest availability of property to buy. According to the 2011 Census, buy-to-live investors (defined as buyers of first homes, “second homes” or pied-a-terres) account for just 37% of the housing market here. On a pro-rata basis, this gives a possible maximum of 1,985 units bought by foreigners as second homes, assuming that every property is purchased by non-domiciles, just 0.3% of the total transactions in England and Wales over the last year. To put that in context, this is the same number as changed hands in every single day in the rest of the country. Moreover, this number is rapidly shrinking as available stock continues to contract in PLC; transactions have fallen by 50% since 2000.

At 38%, the biggest segment of the PLC market is actually bought for buy-to-let rather than for buy-to-live investment, i.e. for the private rental sector which runs at almost 100% occupancy. A sector that the Government is actively encouraging and which represents a hive of business activity, stimulates economic growth, tax revenues and retail demand.

Analysis by London Central Portfolio (LCP) shows that international buyers contribute Â£1.2bn per annum to the UK economy and Exchequer through buy-to-let purchases. Unofficially our “6th biggest export”, it supports a huge array of trades, professions and services nationwide, involved in the building, buying, design, refurbishment, letting and maintenance of rental properties.

The balance of the housing market in PLC comprises social housing, with a surprisingly high 25% of properties designated as socially rented. This represents a far greater number than the rest of the country, which stands at 18%, and leagues above Greater London which stands at 13%. 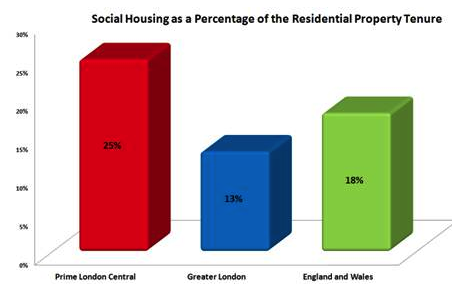 Furthermore, The Empty Homes Agency calculates that just 1.4% of properties in Prime London Central were long term empty. This compares with a slightly lower national figure of 1.1% long term empty.

“Whilst it is undeniable that international demand has put an upward pressure on prices, the view championed by Simon Hughes that this tiny area of London should be ‘given back’ to Londoners, is undoubtedly flawed. To achieve this, prices in PLC would have to drop to just Â£253,000 or 18% of their current value, based on of an average salary of Â£39,000 in Kensington & Chelsea. It is not realistic to think this could ever occur and in reality, the economic fallout from this, in terms of jobs that depend on a healthy and growing property sector would not bear thinking about” comments Naomi Heaton, CEO of London Central Portfolio.

More to the point is that PLC is actually very small, just 6 square miles with less than 200,000 households. The new data suggests that less than 2,000 homes are changing hands each year which are not actively being put to use in the Private Rented Sector or through social housing. Moreover, this number is shrinking, as people hold onto their property for longer.

“The intense adverse focus on such a small sector which contributes so significantly to the UK economy would seem to be politically motivated rather than economically driven or statistically assessed. It acts to divert attention from the real issue on how to provide more housing and in so doing, the government runs the risk of killing the golden goose” explains Heaton.