Figures released today by the Financial Conduct Authority (FCA) have revealed that in July 2013 there were 32,690 retail investment advisers working in the UK. This is within the range* predicted by independent researchers commissioned by the FCA's predecessor, the Financial Services Authority, in 2012.

The number of advisers has risen from 31,132 since December 2012, the last time the numbers were officially counted. The FCA believes the increase is attributable to advisers re-entering the market.

One of the objectives of the FCA is to ensure that consumers are adequately protected and people have confidence in the integrity of the financial system. The Retail Distribution Review (RDR) set out to do this with new rules on investment advice, which set standards of professionalism to inspire consumer confidence and build trust.

The rules, which came into force on 31st December 2012, required retail investment advisers to attain a higher standard of qualification, adhere to ethical standards and carry out continuing professional development. Advisers need independent verification that they are meeting the standards in the form of a Statement of Professional Standing from one of eight accredited bodies.

Six months after the introduction of the new rules, 97 per cent of advisers have the appropriate level of qualification, with the final three per cent recent entrants who are still studying within the timescales permitted by the rules. This stands in contrast to 2010 when less than half of all advisers were qualified to today's standard.

Clive Adamson, director of supervision at the FCA, said of the latest figures:

"Today's figures show that those looking for financial advice still have plenty of options open to them. What's more, by establishing standards across the industry we are helping to build confidence by reassuring consumers and raising the profile of the adviser profession."

The FCA is also today publishing the full research by RS Consulting into the intentions of financial advisers ahead of the introduction of RDR; the research was commissioned by the FCA's predecessor, the FSA, and is dated April, 2013. The full report includes predictions on advisor numbers. 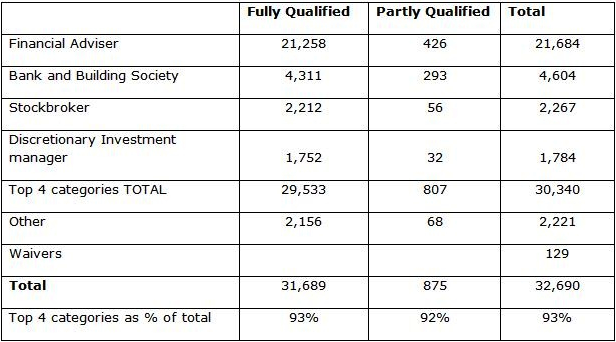 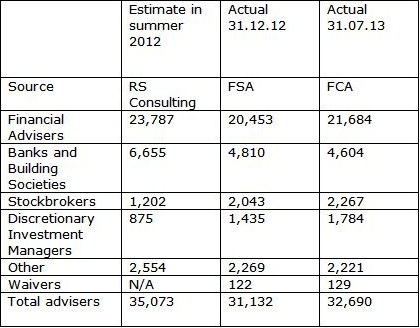 * Please note that the research estimated a minimum of 31,284 and maximum 32,744 advisers but does not try to take account of new entrants. The estimates are based on predictions from advisers operating in 2012 when asked what they would do after 31 December 2012.