At the very core, this U.S. government shutdown means that about one million federal employees will be told to go home without pay. Non-essential services will be stopped until further notice. This will be mainly due to a lack of funds. (Source: Committee for a Responsible Federal Budget, September 24, 2013.) National parks will be closed; museums will be shut along with many other services.

What government services will be available? Social security and the Medicare payments will be sent out to those who already rely on it. For those who are applying for it during the U.S. government shutdown, they will not have their applications processed for the time being.

With all this, there are many different opinions. With so many people sent home, the U.S. government shutdown is an immediate money-saver. But on the other hand, those who aren’t getting paid are likely pulling back on spending and that will affect gross domestic product (GDP) growth for the U.S. economy.

As all this happens, I stay far away from making political predictions, as after all, that’s all we are dealing with here—two political parties pitted against each other resulting in a U.S. government shutdown.

Over the year, I’ve made various economic forecasts in these pages that have generated strong responses from my readers. One such prediction (that I started making just a few months ago) has garnered more reader feedback than ever. That prediction: the U.S. national debt will double from its current $17.0 trillion to $34.0 trillion, or about 210% of GDP, where Japan’s debt-to-GDP multiple stands today.

How can this happen and what does it mean for the small investor? Follow on to “Michael’s Personal Notes” (below) for the answer.

I often write about the crisis faced by the municipalities, cities, and states across the U.S. as they continue to register budget deficits year after year. Cities like Detroit and others in California have already filed for bankruptcy. When all of this was happening, I kept asking: when will the U.S. government bail out the troubled cities? 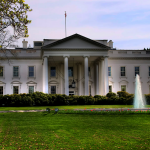 The White House by Javier Losa

The U.S. government will be giving the city of Detroit $150 million for “demolition and redevelopment purposes.” In addition, it will also provide the city with almost $140 million to better its transit system. Another $25.0 million will be granted to the city to assist in its streetcar project. (Source: Newsmax, September 27, 2013.)

The economic situation for “Motor City” has gone from bad to worse. But I ask one question: if the U.S. government “helps out” Detroit, won’t other cities struggling with a budget deficit feel shortchanged? After all, they are in dire need of money too!

But back to my original concern and the theme of today’s issue of Profit Confidential: how can the U.S. national debt ever get under control if the U.S. government now starts helping municipalities, cities, and states that have budget deficits? The answer is it can’t.

What does it matter to you?

In upcoming issues of Profit Confidential, I will be writing about how the U.S. is following the exact path of the Japanese economy. Both countries experienced the biggest boom-bust cycle since the Great Depression. Both responded by aggressively lowering interest rates and printing more paper money.

Today, Japan’s debt-to-GDP is 210%, while that multiple stands at 105% to 110% for the U.S. (Japan’s bust happened 20 years before the U.S. bust.) I think by following what happened to Japan on the way to 210% debt-to-GDP, and seeing which investments did well during that period and which didn’t, will be of utmost importance to my readers—and that’s what my research team is working on right now. In upcoming issues, you’ll read about what individual investors can learn from Japan’s “example” to better profit and protect themselves from today’s debt-crazed U.S. government.

“Partying Like a Drunken Sailor: The party continues. Stocks are making new highs and people are spending like there is no tomorrow. Why? I really don’t know. Big [cap] stocks, they just continue going up. Wall Street bonuses are at record levels. Popular consumer goods are flying off the shelves. Designer clothes, fast and expensive cars, restaurants with one hour waits…people are spending in America today at an unbelievable clip. 1932, 1933…who remembers those years? The depression of the 1930s was the biggest bust of modern history. 2005, 2006, 2007…welcome to the biggest boom of the same period. When will it all end? Soon, my dear reader. Soon.” Michael Lombardi in Profit Confidential, February 7, 2007. Michael started talking about and predicting the financial catastrophe we started experiencing in 2008 long before anyone else.