The Office for National Statistics (ONS) has reported that public sector net borrowing (excluding public sector banks), (PSNBex) for July 2017 was a £0.2 billion surplus, compared to a borrowing of £0.3 billion the same time last year.

This is the first July PSNBex surplus since July 2002.

The Office for Budget Responsibility (OBR) forecasts that PSNBex will be £58.3 billion by the end of the financial year in March 2018. 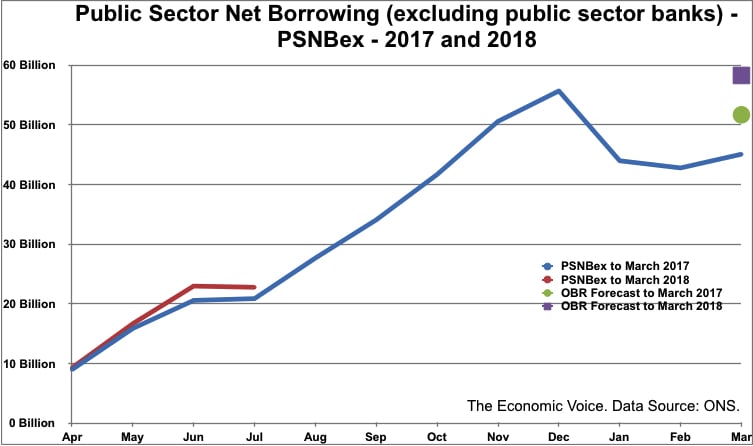 “A welcome summer break for the Chancellor as the public finances saw the first July surplus since 2002.

“Specifically, there was a marginal repayment of £184m on public sector net borrowing excluding public sector banks (PSNBex) in July. This compared to a shortfall of £308m in July 2016.

“The public finances particularly benefited in July from a 10.6% year-on-year (y/y) rise in self-assessed income tax receipts, which ties in with the resilience of the labour market.

“There was a modest y/y dip in corporation tax receipts in July but that was influenced by the Office for Budget Responsibility (ONS) smoothing out revenues over the year. Significantly higher debt interest payments also limited the public finances in July as higher inflation increased the cost of servicing index-linked government bonds. Indeed, interest payments of £4.9bn in July were up 18% y/y.

“If the pattern of the first four months were repeated over the full fiscal year, 2017/18 public borrowing would come in at £49.2bn. This would be well below the shortfall of £58.3bn forecast by the ONS in March’s Budget.

“While a struggling economy and higher interest debt payments look likely to weigh down on the public finances over the coming months, there’s a good chance that the Chancellor will have a little wiggle room in November’s Budget.

“Rising dissatisfaction with austerity and the public sector pay cap is exerting pressure on the Government to recalibrate fiscal policy in November’s Budget. However, it currently seems most likely that there will be limited adjustments to the fiscal approach rather than radical policy changes.

“While the Chancellor has indicated that he has taken on board the views of the electorate, he has stated that he remains committed to the fiscal rules set out at the Autumn Statement which lead to a balanced budget by mid-2020's.”

Mothercare to close over a quarter of its UK stores