First-time buyers can save £1,300 a year by buying rather than renting

Difference increases three-fold over the past five years

The cost of a first-time buyer owning a home in the UK is now on average £110 per month lower than renting or £1,316 per year (14%), according to research by Halifax.

The average monthly mortgage costs associated with owning a three bedroom house for a typical first-time buyer in the UK stood at £677 in June 2014; £110 lower than the average monthly rent paid2 on the same property type at £787. Five years ago, the average cost of buying was £37 a month more (£734 v. £697) than the typical rent paid. (See Table 1)

The significant fall in the monthly cost associated with buying compared to renting has been driven by the decline in the average mortgage rate since 2009. The mortgage rate3 for a first time buyer has fallen to an average of 3.09% from 4.92% in June 2009, helping to reduce the average monthly mortgage payment by £57 (8%).

In the past year the difference has grown from £93 to £110; although the average buying cost has grown by £25 this has been more than offset by average rental costs rising by £42.

Buying is cheaper than renting in all regions, except the East Midlands

Regionally, buying is currently most cost-effective compared to renting in London, Wales and the West Midlands; with the average first time buyer taking out a new mortgage to finance house purchase in the West Midlands paying 12% less per month than the typical private tenant. Only in the East Midlands are first-time buyers still better off renting. (See Table 2)

First time buyers up a third in the past year

The lower costs of owning compared with renting, together with lower mortgage rates and an improving economy may have contributed to a 29% to the number of buyers getting on the housing ladder for the first time. In 12 months to June 2014 there were 301,300 house purchases made by first-time buyers, compared to 233,400 a year ago; and almost double compared to five years earlier (155,700).First-time buyers now account for 45% of all house purchases, compared to 38% in 2009.

"It is clearly encouraging that since 2009 there has been a significant decline in the cost of buying a home for those for those trying to get on the housing ladder. The improvement is due to a combination of lower mortgage rates and rising private rents. In contrast, market conditions for renters have deteriorated as rents have risen over the same period.

"Buying costs have been remarkably stable for much of the past five years making home ownership a more attractive option. With greater availability of mortgages that require smaller deposits, the property ladder has also become even more accessible for those who can afford the monthly costs of owning but had previously not been able to save the necessary deposit." 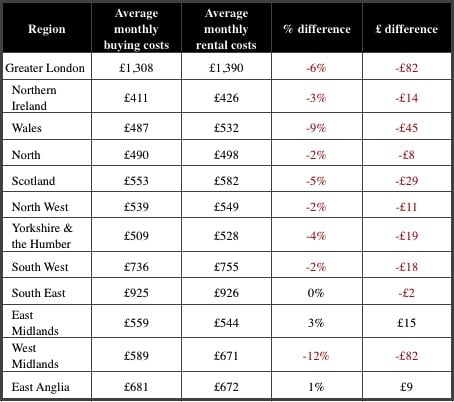 US Dollar still in retreat as the Pound makes further gains

Brits in the dark about their partner's debts