Despite the fact that fixed rate mortgages are at their lowest rates in recent years, the number of homeowners remortgaging onto these products remains low.

While fixed rates offer homeowners the stability of a guaranteed rate for a set term, making it easier to plan mortgage costs into a monthly budget, analysis by Halifax has found that a consistent number of homeowners are choosing to remain on Standard Variable Rate mortgages.

Since September 2012 fixed rates have fallen for 16 consecutive months, during which time they have, on average, been below Standard Variable Rate (SVR) mortgages by 83 basis points (Fixed Rates 3.52%; SVR 4.36%).

Although the financial incentive to remortgage has improved in this time, activity in this market has barely changed, with an average 31,650 remortgage transactions per month (30% of all home loans).

Since the start of the year there has been increasing consensus amongst mortgage commentators that mortgage rates are likely to increase, having remained consistently low in more recent years.

“As Standard Variable Rates remain at historically low levels, which may have reduced current borrowers' incentive to move onto a fixed rate, you would still expect to see remortgaging activity respond more significantly to the reduction in fixed rates also.

“With recent reassurances from the Bank of England that interest rates are unlikely to increase in the very near future, borrowers now appear more willing to bide their time on a standard variable rate until there are stronger signs of base rate changing although it is important to remember that this is not the only factor that influences mortgage rates.” 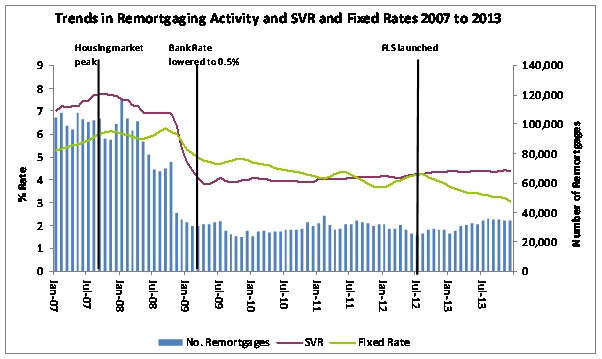 Source: Bank of England and the CML

Looking back over the last five years, figures show that although fixed rate mortgages have fallen by 320 basis points since reaching a recent peak of 6.23% in September 2008; activity in the remortgage market of borrowers moving onto these products continues to remain low, averaging 31,750 per month compared to over 100,000 per month in the previous five years.

Relief for consumers and the BoE as CPI inflation unexpectedly falls