The flash Euro area composite PMI fell back from 52.2 to 51.5 in October: below expectations of a marginal rise. Aside from last month, the PMI was nevertheless still the highest since mid-2011, and the broader picture remains one of notable improvement from troughs of around 46 in the Spring.

Conditions in both Germany & France eased over the month, with the aggregate PMI also suggesting softening in other countries. At these levels, the composite PMI is consistent with Euro area GDP expanding at around a 0.2% quarterly pace, but we think various surveys may overstate underlying growth in the Euro area at present – potentially due to less coverage of smaller, harder-hit firms – and overall we think Euro area GDP may expand by around 0.1% in both Q3 and Q4.

In Germany, the composite PMI fell from 53.2 to 52.6: below market expectations of a marginal rise. While conditions in the manufacturing sector edged higher over the month, the services PMI fell back notably, driven by weaker employment and new orders balances. That said, much of that weakening merely reversed strong gains last month, and in aggregate the PMIs still accord with our expectations of German GDP expanding by around 0.3% in each of Q3 and Q4.

In France, the composite PMI fell back from 50.5 to 50.1: below market expectations of a small rise. Conditions in both the manufacturing & services reportedly softened over the month, driven by weaker new orders in both sectors. Apart from last month, the composite PMI was nevertheless higher than at any other point since early-2012, and in a broader context has improved notably from a trough of 42 in the Spring. But at around the 50 "no change" mark, the PMIs are in line with our current expectations of 0.0-0.1% GDP growth in France over Q3 and Q4. 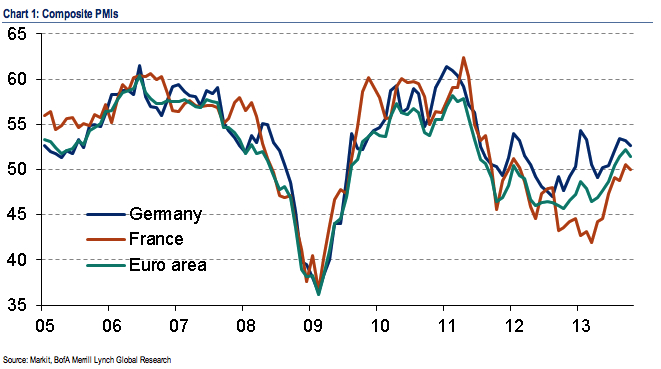 For the full report and important disclosures click here.

New research outlines the ingredients for a successful ‘Big Society’