Flipping a Home for Profit Is Back?

When I turn on the TV or read a newspaper, reporters are touting how robust the U.S.Â housing marketÂ has once again become. Voices on the radio “sing” a similar tune. Some are saying the “rebound” in the housing market will continue for a while. Charts of home prices rising in Phoenix, Arizona and Las Vegas, Nevada are all over the media.

It seems like flipping a home for profit is back!

When I look at and hear all this, I keep asking myself, “Am I missing something here? Is the housing market actually as great as we are being told?”

I’m on the opposite side of the fence: when I hear about the housing market in the U.S. economy these days, it reminds me of years past. I remember going to parties and functions and all you heard was how home prices were rising…seemed like everyone was getting either a vacation home or a second home.

Now when I look at the fundamentals, the conclusion of my analysis is different from what we are being told by the mainstream.

For the housing market to improve and have sustainable growth, we need first-time home buyers to be active in the marketplace. Investors and speculators are there to profit—they’ll run quickly when returns diminish. A first-time home buyer stays in the house he/she buys for the long term.

We are not seeing this.

In 2012, institutional investors jumped into the U.S. housing market and bought vast amounts of empty homes to rent. This created demand and caused home prices to go up—economics 101.

Prices of goods and services consumers buy continue to go up. Milk, eggs, bread, butter and other food prices are going up, either through higher prices or smaller-sized packaging. Going to the same restaurant you went to last year will surely cost you more today. Consumers are spending more and more on their basic needs and they are becoming cost-savvy—not by choice, mind you.

Consumers are shying away from the purchase of non-essential goods. Sales at furniture and home furnishing stores in the U.S. economy declined 1.4% in July compared to June. Sales at electronics and appliances stores declined 0.4% in the same period, and have been stagnant since the second half of 2012. (Source:Â Federal ReserveÂ Bank of St. Louis, last accessed August 13, 2013.) 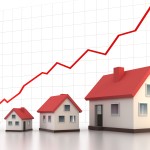 The jobs created in the U.S. economy since the Great Recession have been in the low-paying service and retail sectors—the lowest paying jobs.

Mortgage rates have also recently increased sharply. This morning, the bellwether 10-year U.S. Treasury hit a yield of 2.75%; that’s almost one full percentage point higher than this day last year. The standard 30-year U.S. mortgage is closing in on five percent for the first time in years! Higher interest rates are a huge threat to the housing market recovery.

And we have a significant portion of homeowners living in homes under negative equity; i.e. their home is worth less than their mortgage.

With potential home buyers in trouble and interest rates rising, the housing market faces a huge problem. That’s exactly what the price collapse of new homebuilder stocks has been warning us about. The Dow Jones U.S. Home Construction Index, which includes all the major public new-home builders, is down 25% in just the past three months!

It’s no surprise that I remain very skeptical about the so-called recovery in the U.S. housing market. My opinion will change when I see the average American getting back on his feet (getting a job that he has skills for and increasing his ability to spend), interest rates falling, and real economic growth happening—all things that will not happen for years, if they ever do happen at all.

“Consumer confidence does not change overnight. In the U.S., 70% ofÂ GDPÂ is based onÂ consumer spending. And in my life, all the recessions I have seen or studied have only come to an end when consumers started spending. With consumer sentiment getting worse, and with the U.S. personal savings rate at near record lows, it may take two or three years for consumers to start spending again.” Michael Lombardi inÂ Profit Confidential, February 25, 2008. By the end of 2008, the rest of the world was realizing the recession would be much longer and deeper than they thought.

Cameron and the elusive EU referendum