Feathered Protesters Deliver Over 44,000 Signature Strong Petition Calling for Cruel Dish to Be Banned in All European Parliament Restaurants

On Wednesday, five PETA supporters wearing business suits and duck masks – and carrying briefcases decked out with the flags of Germany, France, the UK, the Netherlands, and Belgium – delivered a petition with over 44,000 signatures calling on the European Parliament to ban serving foie gras at every EU Parliament building.

Strasbourg Parliament is one of the three EU Parliament buildings to serve foie gras, a dish that is produced by force-feeding and deliberately sickening ducks and geese. PETA – whose motto reads, in part, that "animals are not ours to abuse in any way" – have joined with 36 MEPs in asking President Schulz to ban foie gras because of the cruelty inherent in the industry. 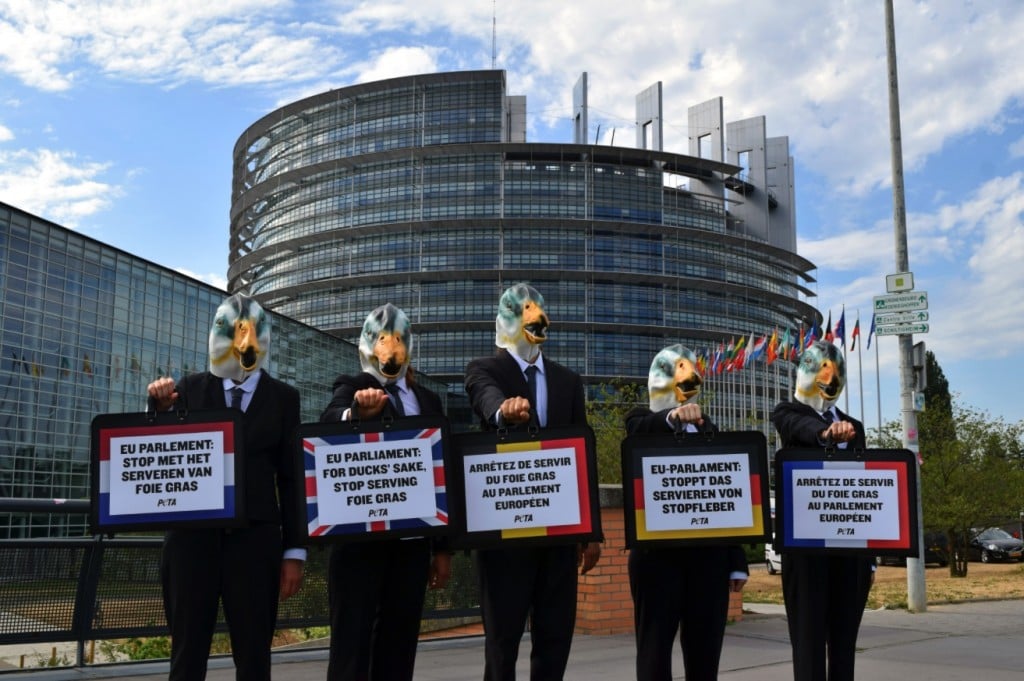 "Kind people everywhere are opposed to force-feeding and sickening birds for foie gras, but Strasbourg and other Parliament buildings refuse to stop serving this hideous dish", says PETA Director Mimi Bekhechi. "PETA is calling on European Parliament to listen to its own members and ban foie gras from its restaurants for good."

During foie gras production, huge amounts of grain and fat are pumped into birds stomachs through pipes that are rammed down their throats several times a day. Their distended livers press against their lungs, making breathing difficult and causing them to pant constantly. This cruel procedure is illegal in the Czech Republic, Denmark, Finland, Germany, Italy, Norway, Poland, and the UK, among other European countries.