Dressed in wetsuits, raincoats and wet-weather gear, the campaigners carried a banner bearing Mr Paterson’s own words: ‘Climate change? “We’re very good at adapting"' to show how unsuitable he is for his ministerial role and to call on the Government to tackle climate change.

During his tenure as Secretary of State, Owen Paterson has cut Defra’s climate change adaptation team from 38 staff to just 6, and slashed his department’s domestic climate change budget by 40%. He also famously forgot his wellies when he visited flooded areas in Somerset last month.

The campaigners subsequently delivered a set of petitions in sandbags to 10 Downing Street. The petitions, collectively bearing the signatures of over 120,000 people, called for the Prime Minister to take action on flood defences, tackle climate change by setting tougher emissions targets and ending fossil fuel subsidies, and to sack Mr Paterson as Environment Secretary. 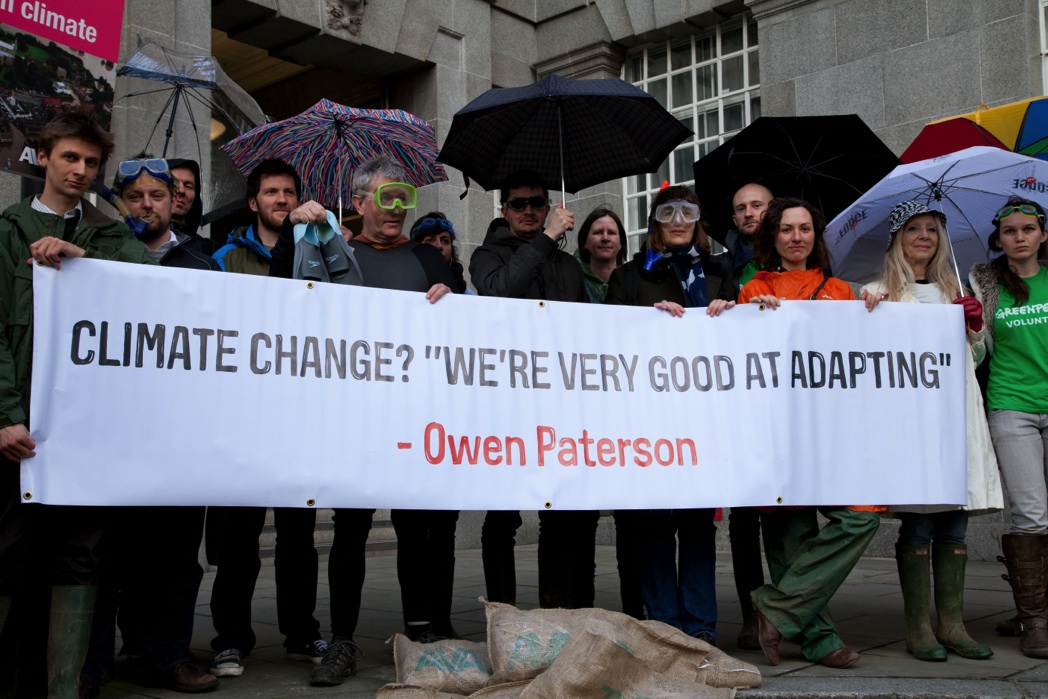 Guy Shrubsole, climate campaigner at Friends of the Earth, said:

“Owen Paterson’s clearly out of his depth – he’s ignored climate science, slashed flood defence spending, and he showed up in Somerset without a pair of wellies.

“Given the Environment Secretary’s relaxed views about Britain’s ability to adapt to worsening flooding we thought he could do with some more wet-weather gear – since based on policies he’ll have to either sink or swim.

“The tragedy is that thousands of households will suffer further floods until the Government invests properly in flood defences and takes serious action on climate change.”

“Thousands of people mopping out their homes know it, the vast majority of scientists have proved it and mainstream public opinion agrees – extreme weather events will become more frequent as the climate changes. Yet David Cameron is hanging on to his Environment Secretary who is in denial about the impacts of global warming.

“It is time that David Cameron replaced Owen Paterson with someone who will be tough on flooding and tough on the causes of flooding.”

"The majority of Britons think that without action to slow it, climate change will pose a threat to their way of life, and scientists warn we need to cut carbon pollution in half by 2030. Cameron's mandate is clear — it's time to face down the deniers and commit to strong action, now.”

Graham Shaw, 38 Degrees member from Somerset – who started a petition calling on David Cameron to increase spending on flood defences and follow the recommendations made by the Committee on Climate Change – said:

"My main concern at the moment is that the government need to instruct each and every insurance company that has happily taken money from the householders as premiums, to pay up fully, pay up ASAP to help all these people suffering at this time because of the flooding. Local authorities and national government need to make available all equipment to dry out these properties and help with any rebuilding. They are in need of help now."

"Thousands have called on Cameron to phase out fossil fuel subsidies to minimise climate catastrophe and intensifying floods. But just this week we've seen a whole new wave of political support and subsidies for North Sea fossil fuels. Future-proofing ourselves against the worst of extreme weather events requires the government to stop subsidising the dregs of this dirty and dangerous fuel source."

"It’s time for the government to stop drowning young people's futures. We need a government that takes climate change seriously. This begins by thinking beyond five year election cycles and putting flood policies in place which safeguard our environment and communities."

Details of the petitions handed in to Number 10

• Friends of the Earth petition – http://www.foe.co.uk/campaigns/climate/press_for_change/flooding_41765.html

Employers In The Driving Seat For Reformed Apprenticeships