According to analysis of 100,000 interviews with SMEs carried out quarterly since 2011, Britain’s small and medium sized businesses are showing signs of migrating back to external finance such as loans and overdrafts.

Published today in the latest edition of the SME Finance Monitor, the research shows that whilst use and demand for finance remains stable overall in 2015, once the Permanent non-borrowers* are excluded, remaining SMEs were more likely to be using external finance (70% up from 65% a year ago) and to be planning to apply in future (25%, up from 21% in 2012).

Larger, ambitious SMEs and those with younger MDs are most likely to be willing to use external finance to help the business develop

]In a market where current demand for finance appears limited, the Monitor reveals that it is SMEs currently using external finance that are most willing to use it in future. Overall nearly one half (45%) of SMEs agree that they would be happy to use external finance ‘to help the business develop and grow’. Amongst those already using finance, over half agreed with this statement versus one third of those who hadn’t used finance over the past five years.

Of those already using external finance, agreement that they would use it in future increased again if they had plans to grow (particularly if they were looking to grow by 20% or more) and if they were a larger business – amongst those SMEs, over seven in 10 would use external finance in future. Of those who had not used external finance in the past five years, agreement increases to over half if the owner/Managing Director is young and ambitious (aged under 30 and has plans to grow the business by 20% or more).

For those who do apply, success rates are at the highest levels seen on the Monitor

Eight in 10 (81%) of all loan and overdraft applications in the last 18 months resulted in a facility, the highest level recorded to date on the Monitor. This is due to increasing success rates for those applying for new money (70% success rate from 54% in the 18 months to Q4 2012) and a particular improvement for those applying for the first time (61% were successful, up from 41% in the 18 months to Q4 2012). These first time applicants do though remain less successful than those who had borrowed before (77% were successful) or those renewing an existing facility (99% successful).

Confidence of a future successful application is increasing

Over half of those planning to apply (53% in 2015) were confident that the bank would agree to their request, and this is improving over time (it was 42% in 2012). Confidence levels remain below actual success rates for both renewals (99% success v 57% confidence) and new money (70% success versus 43% confidence).

“100,000 interviews with SMEs since 2011 give us the ability to identify trends and changes in behaviour. Our analysis is pointing to a return to external finance amongst the larger, more ambitious SMEs, such as those that have plans to expand by 20% or more. There will always be a portion of businesses that don’t want to use external finance, but it looks as if the number of these, which reached highs in 2015, may be starting to reduce.” 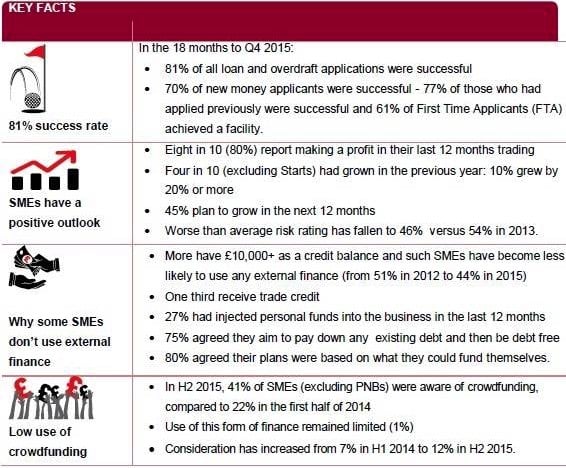