And that is exactly what this is. The cold, calculated and sadistic torture of two helpless animals, by people in pursuit of profit.

Tom and Misha are two bottlenose dolphins that were cruelly snatched from their natural habitat and placed in a swim-with-the dolphins sea pen at Kas, Turkey. But then, against all common animal welfare regulations were bundled into a fruit and veg lorry on 8th June, subjected to a gruelling 4 hour journey then manhandled roughly into a small swimming pool in Hisaronu, Olu Deniz. The whole thing was so traumatic that they were unable to function properly for the following five days.

Their plight has been highlighted by Donal MacIntyre in The Express, the actress Helen Worth and most importantly the tireless efforts of the ‘Dolphin Angels’. They have now been joined by Born Free, which has promised financial support to help repatriate the dolphins to the sea, as well as SAD-DEMAG, a Turkish NGO working with Born Free.

Now let me paint the very sordid picture. The pool has become a cess-pit. The dolphins swim amongst their own gathering faeces. A vet found two parasitic worm larvae in the pool and the bacterial coliform count was an astronomical 11,000 per100ml. Anyone who comes into contact with the water should be on an immediate course of antibiotics***. There has been a government directive that the pool is unfit for humans. But still the ‘owner’, a Russian named Aleksandr Kuznetsov, tries to charge visitors Â£50 a throw to get in the pool for 6 minutes with the dolphins.

The pool and the tarpaulins placed around it to keep prying eyes out do not provide sufficient protection from the sun in such shallow water. Not only that but the pool itself is subsiding and may just collapse. Bear in mind too that dolphins naturally live in the saline water of the sea, not in a chlorinated pool that is slowly blinding them.

Now to their so called food. Their only sustenance is a starvation level of frozen fish.

Dolphins may look like they are smiling. But they have no facial muscles, it is a frozen expression that masks the true terror, pain and stress they are feeling.

Dolphins do not do well in captivity, and pups born in captivity usually die quite quickly.

Humans are not being a friend to dolphins by keeping them in any sort of captivity, let alone a subsiding potentially freshwater cess-pit. All they are doing is lining their own pockets.

For Tom and Misha time is running out pretty damn quickly, they may have only weeks to live before either the pool collapses or they die of infection. The pictures on FaceBook (link below) are not pleasant viewing.

The Turkish authorities know all about this but continually fail to act. This is made worse because, as we understand it, the dolphins are actually owned by the government but rented out to dolphinariums on the basis that certain minimum standards are adhered to. 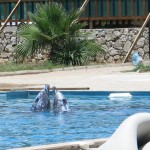 The trouble is that this type of ‘trade’ is very lucrative in Turkey so the government may be unwary of stepping on toes. In fact, there are probably some who are hoping the dolphins will be dead and forgotten before they have created too much adverse publicity.

Oh yes, Kusnetsov is prepared to let the Dolphins go, as long as someone gives him Â£360,000. But if that were to happen I would bet that his pool, just like many over the world, would suddenly find it contained more dolphins accompanied by callous outstretched hands waiting for another quick easy pay out.

No! The Turkish government must confiscate the dolphins and hand them over to Born Free who is equipped to handle the situation. And if Turkey as a whole wants to show the world it has true regard for the welfare of animals it would make Khuznetsov pay as well as immediately shutting down all such operations in its country.

All I want to do is help take the first step by getting Tom and Misha released and quickly before it is too late.

Please help these poor animals by writing to the Turkish Embassy of your country today (outline below). Â However because of the urgency of this case please also send via email a PDF or scan of the letter on headed paper directly to Cem Orkun KiraÃ§ SAD-DEMAG sad@sad.org.tr

To The Turkish Embassy/Consulate

I have been following the fate of the two dolphins Tom and Misha in HisarÃ¶nÃ¼, Ã–lÃ¼deniz, Turkey for some weeks now with growing alarm.

I am concerned that this situation has been going on for so long with no real action by the relevant authorities being evident.

I am aware, just as you are, that veterinary reports and subsequent laboratory tests show that the situation for the dolphins is extremely serious and furthermore the dolphins will die if they are not released from this hell-hole very soon.

As you will also be aware, NGOs and charities such as Born Free have stepped up to the mark and declared that they will voluntarily repatriate the dolphins to the sea.

I urge you to take this opportunity to show the world that Turkey truly cares about animal welfare and take Tom and Misha into protective custody and hand them over to Born Free before they die.

Inaction on the part of your government will be an active contribution to their continued suffering and eventual death.

***If fecal coliform counts are high (over 200 colonies per 100 ml of water sample) in the river or stream, there is a greater chance that pathogenic organisms are also present. A person swimming in such water has a greater chance of getting sick from swallowing disease-causing organisms, or from pathogens entering the body through cuts in skin, the nose, mouth, or the ears. Diseases and illnesses such as typhoid fever, hepatitis, gastroenteritis, dysentery, and ear infections can be contracted in waters with high fecal coliform counts. Source – www.freedrinkingwater.com/water_quality/quality1/1-how-coliform-bacteria-affect-water-quality.htm