India has said that it doesn't want the Â£1bn foreign aid provided by Britain.

With India's economy growing at 8.5% and Britain's economy growing at just 0.6%, it is appropriate to remind the British Government that charity begins at home. This makes perfect sense when you understand that destroying our economy will make us unable to help others in the future. There is also the moral dilemma of using force to tax productive people in this country, only to redistribute that wealth across the globe. The Ten Commandments state that "thou shalt not steal". That moral framework should also apply to government action. It should be noted that the British People donate about Â£8bn per year, and that amount would soar if we became wealthier.

Foreign aid is also tricky to justify when we have so many social problems at home.

Britain also has a trade deficit with India, exporting about Â£5bn to India and importing Â£7bn. Our trade with India therefore dwarfs any benefits from foreign aid. Arguably India would be better off if Britain instead invested in production so that we can provide the better goods and services and, if British people can become wealthier and purchase more of their goods and services. We all know that government's are out of cash, so foreign aid cannot grow significantly, but given the right tools, trade could grow significantly.

Overall, Britain spends over 11 Billion on foreign aid. Congressman Ron Paul, currently running for the Republican Nomination for President in America, is currently running on a Conservative platform that would eliminate all foreign aid. He claims that foreign aid taxes the poor people in the West, handing their money to wealthy people in the developing world. Indeed, much of it finds its way into the hands of dictators, which he argues led to the Middle East crisis, where Arabs rebelled against dictators, which have been propped up by the money they received from foreign aid. It often comes with strings attached, such as military purchases, and then time and time again that military hardware is turned in on the people in those countries.

If our future and the future of the third world are both better served by trade then foreign aid should be returned to the tax payer. Business rates, for example, only apply to businesses operating on British soil. They deter factories, shops and offices reducing our economic output and our trade with others. The amount of money we spend on foreign aid is about half of what the government take in Business Rates. Therefore, we could in a moment eliminate foreign and slash business rates in half. Our trade deficit with other countries would narrow and we would be more able to provide the Indian economy the goods and services it requires to prosper. 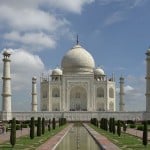 The additional economic growth here would increase corporation tax receipts and over a few years we could probably eliminate Business Rates altogether.

Alternatively, we could slash Council Tax almost in half, boosting domestic demand, or slash income tax by a whopping 7%.

If, via trade, the third world would benefit from the elimination of foreign aid, why not just get rid of it immediately. If India doesn't want it, let’s remember that charity begins at home and repatriate our hard earned cash.