In what comes as more than a bit of a surprise, considering ongoing uncertainty over US sequestration (Budget sequestration is a procedure in United States law that limits the size of the Federal budget andÂ  involves setting a hard cap on the amount of government spending within broadly-defined categories) no concrete signs of an end to political chaos in Italy and rumblings in China and its housing market, risk markets seem to have made the decision that things are on the up (or at least, not as bad as we thought they were last week!) and the Dow powers to an all time high.Â  It’s a funny old game, as someone once said.

So FX markets take a back seat trade within tight ranges as upcoming central bank meetings and payroll data from the US (due Thursday and Friday) cast an inevitable shadow as equity markets steal all the headlines. Following on from stellar performances from the DJIA and FTSE (Wednesday we saw a record close up on the DJIA) the Nikkei closed + 2.1%, the highest since September 2008. This has given some slight “risk on” intraday direction to G10 and Asia FX moves, although everything is again confined to tight ranges with volumes light.

Yesterday we saw some short covering in Cable, but rather than constituting any change of heart towards Â£, the failure to break above 1.5150 and prompt an attempt on 1.5200 resistance, suggestsÂ  a slight reduction of GBP shorts prior to the potential “risk events” later in the week, and with UK construction PMI data disappointing (despite house building improvement) closely following on from Fridays surprisingly weak manufacturing survey, expect Sterling rallies to fade and it continue to trade from a heavy perspective in the coming weeks.

In Australia, the overnight data showed Q4 GDP was exactly in line with consensus (0.6 q/q. 3.1 y/y (3.0 cons). Q3 revised upward from 0.5 to 0.7%), and though the impact on AUD was fairly limited, the “Antipodeans” are just about the best performing of the G10 currencies at the moment (although that’s not exactly saying much in the current climate) as both AUD and NZD held downside key support levels and bounce in what now appear to have been obviously “oversold markets”. Obvious after the event isn’t it! 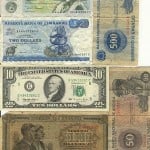 For AUD the holding of key 1.0100/50 support zone (October low) could give impetus for a further pullback but as ever there are several key hurdles to overcome before any new found bullish sentiment can be nurtured, starting with the 1.0290/00 high from late last week. Take this out and it should suggest a closer test of the important 1.0375/80 zone and where you would expect to see a few profit takers emerge. Similarly, with NZD/USD reversing back above the .8200/25 support zone, some additional upside momentum may develop as the 0.8400/20 zone is now viewed as key resistance.

Indeed Australia has become a bit of a focal point this week, as data has come in more positive than expected. The current account deficit for Q4 was smaller than consensus, while January retail sales surged 0.9% during the month, rising for the first time since September. The decision of the Reserve Bank of Australia (RBA) to leave rates on hold at 3% on Monday night (which will have no doubt been helped by recent AUD weakness) and adopt a more wait and see approach by leaving the accompanying statement largely unchanged and albeit still under the umbrella of an easing bias, have all aided the squeeze we have seen.

HoweverÂ  unless we manage to cleanly break above the 200 DMA and get a print on a 1.04 “handle” then the moves of the last 48 hours may very likely just be viewed as a “pullback” rather than a change of sentiment, (in a somewhat similar vein to Â£/$) and an opportunity to re establish short positions.

Have a “bonzer” day!

The Truth and Worldwide Risk Behind China’s Big Slowdown