Forget drones in our skies, driverless cars on our roads are the future of deliveries

By William Sachiti, The Academy of Robotics

With its wealth of resources and dominance in retail delivery, it is Amazon that’s pioneering drone delivery. Recently announcing Drone ‘Beehives’ in cities, Amazon hopes to house drones close enough to population centres to be more efficient than road-based delivery methods.

Like many other companies focusing on autonomous delivery vehicles, I had also originally viewed drones as the best means of efficiency in transporting items from one location to another. Picturing a drone superhighway, I wanted to establish a dedicated airspace for drones to self-navigate through, and to deliver packages to customers.

However, the more I researched, I began to realise the safety concerns of a cluttered airspace, peppered with flying machines, controlled by amateur operators. The cost of establishing such a delivery service would also have been sky-high, and undoubtedly this would have been passed-on to customers.

However, this isn’t actually the biggest issue when it comes to drones. In my opinion the real crunch is whether we’d actually want them, and be willing to live with them. 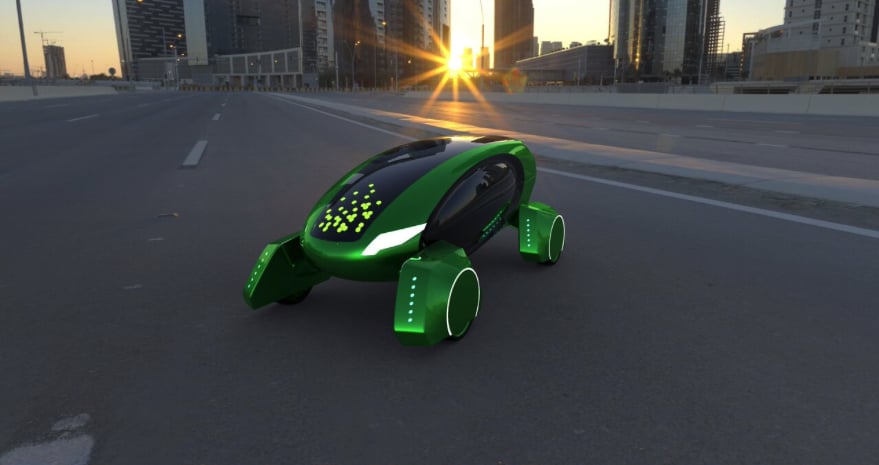 Imagine your neighbour’s daily impulse-buys being delivered by a very loud six-foot drone. The novelty would fade fast as the noise equivalent of a washing machine spinner at full-belt swoops in waking up your kids and spooking your labradoodle.  So forget drones; I strongly believe that ultimately road-based delivery is far safer and more cost effective than the seemingly futuristic, yet comparably less-practical drone courier services.

After all, it’s easy to forget that we haven’t fully tapped the potential of our road networks – both public, unmarked and residential.

We all know they’re on their way, but we’re yet to live in a world of solely or partly-autonomous vehicles, carbon-neutral travel and the shared ‘borrowing’ of cars eclipsing outright ownership.

An increasing proportion of car owners want driverless and electric cars, while half of today’s owners don’t want to own a vehicle in the future, according to a survey of car manufacturing bosses.

Driverless vehicles, and smart devices in general, will benefit from 5G mobile technology. With so many devices feeding data into the Internet of Things (IoT), devices are able to communicate and act in unison.
Autonomous vehicles for instance, will be able to communicate with one another, and other road users.
Of course, other inventors have looked at autonomous vehicles in different ways.

Italy’s Piaggio Fast Forward – a subsidiary of Vespa manufacturers, Piaggio – has invented a cylindrical luggage compartment capable of tailing its owner by a few metres, while holding up to 18kg of cargo.

Looking towards the far-future, I believe product delivery will be digital.

Faxing changed the way we delivered documents, and as technology improves this will begin to apply to physical objects like a new tablet or chest of drawers. It’s not unrealistic to imagine that your latest iPhone could one day not be physically sent to you at all. Rather, it could be purchased via a digital download and, through some 3D printer/fax machine-hybrid, be re-assembled in your living room.

Of course, we can’t expect to see such an invention anytime soon. Technological advancements – despite accelerations in the digital age – are gradual. In the meantime, though, our lives could be transformed by autonomous delivery vehicles.

So whether you’re ordering wallpaper from Homebase, groceries from Tesco or pretty much anything from Amazon, you can bet that, regardless off the type of delivery vehicle, the driver will be digital.

William Sachiti is the founder of robotics technologies start-up, the Academy of Robotics.

He was the founder of Clever Bins – outdoor bins displaying solar-powered digital advertising – which featured on the BBC’s Dragon’s Den. More recently, Sachiti became the founder of digital concierge service, MyCityVenue, which gained 1.6 million users before being sold to SecretEscapes.

He formed Kar-Go in 2016 and is now preparing to unveil his company’s autonomous delivery vehicle, with plans to put fully-fledged driverless cars onto the world’s public roads.

About The Academy of Robotics

Academy of Robotics is a UK start-up specialising in creating ground-breaking robotics technologies such as autonomous vehicles. Their first commercial solution, Kar-Go, is an autonomous delivery vehicle that will vastly reduce the last-mile costs associated with deliveries.

The Academy is based at the University of Aberystwyth, allowing it to leverage resources such as labs and equipment in order to keeps costs low. So far, the Academy has a working prototype robot which can drive itself on unmarked roads and pavements between any two locations, and is simultaneously working with UK car manufacturer Pilgrim to create street legal versions.

2013: The current partnership between finance and technology

Understanding the Role and Limitations of Social Media Research