Just as the government is looking at ways of reducing its financial commitment to the solar power panel feed in tariff, over 100 Tory MPs are now calling for the wind farm subsidy to also be cut.

But a new type wind farm is in development, which is arguably more ‘natural’ than a wind turbine.

The MPs are questioning the amount of money being spent on wind turbines during these ‘straitened times’.

But the government thinks that wind farms are a ‘cost-effective and valuable part of the UK's diverse energy mix’. Although it does acknowledge that they are costlier than burning fossil fuel.

What also makes wind turbines unattractive is noise pollution, bird deaths and the difficulties involved in making such large device.

But enter the Windstalk. This project uses tall stalks projecting from the ground that are designed to just wave with the wind generating electricity in the process. Less noise, no danger to wildlife and no energy loss due to the friction between moving parts. 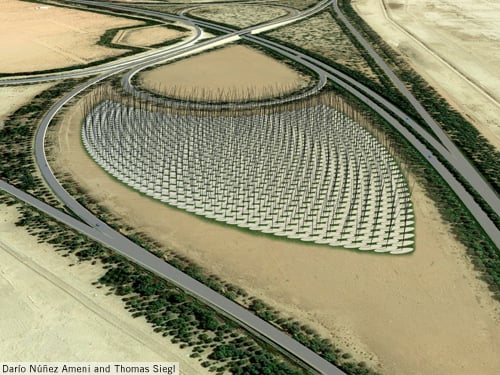 Designed by New York firm Atelier DNA, the hollow carbon fibre stalks taper from a diameter of 30 cm at the base to 10 cm at their tip. Atop the stalks is an LED light that glows brighter the more electricity it is generating. Within the stalks are piezoelectric ceramic discs interspersed with electrodes so that as the windstalk waves it compresses and decompresses the discs so generating electricity. Their efficiency has been equated with that of traditional wind turbines.

At the base of each stalk is a vortice shaped concrete block with no two vortices being alike. Rainwater is encouraged to gather here at the base and so plants can grow wild.

People can also walk between the stalks, just like in a forest of trees. 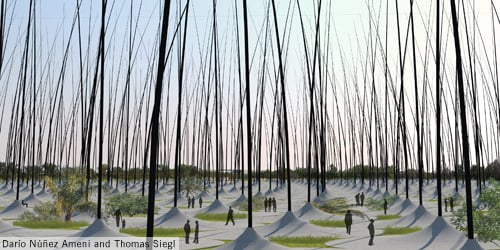 One extra facet is the inclusion of a water based energy storage system underneath the structure. It consists of an upper and lower chamber. When the wind blows some of the energy is used to pump water from the lower chamber to the upper one. Then when the wind abates the water is released to flow back and the pumps become generators.

The Windstalk concept is due to make its debut in the City of Masdar just outside of Abu Dhabi. It will consist of 1,203 stalks each 180 feet tall. This came second in the Land Art Generator Initiative. 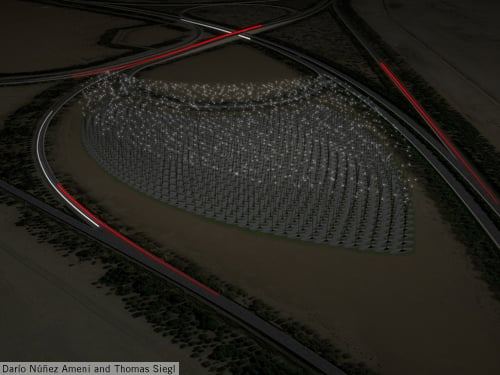 Your bank account is under attack from new virus