Ahead of International climate negotiations and the game-changing Energy Bill vote on 3rd June, former Special Representative for Climate Change, John Ashton CBE, gave a wide-ranging speech last night (Thursday, 16 May) that listed recent Coalition failures. He referred to them as “own goals” that are damaging Britain’s influence on climate change.

This included a “looming carbon budget review which spooks potential investors” and recent calls to leave the EU. The Treasury received particular focus including its move to block a proposed review on risks to the economy from climate change and resource insecurity.

At the event, introduced by Friends of the Earth’s Executive Director Andy Atkins and hosted by the Royal Society of Arts, he also highlighted news that the Department for Environment, Food and Rural Affairs, which is responsible for managing the stresses of climate change, has cut its team working on climate adaptation from 38 in 2009/10 to just six people this year.

In a critique of Cameron’s pre-election environment pledges, Mr Ashton referred to Cameron’s husky being dead with “a neat hole between its eyes”. He reflected that the British people feel “in the grip of forces that our leaders do not understand and cannot manage. So we feel anxious about the future, we don’t look forward to it.”

On the push to get a decarbonisation target into the Energy Bill, Mr Ashton said “It is vital that the target be restored. I can’t myself see how any MP who votes against the target will thereafter be able credibly to claim that they support an effective response to climate change.”

The information on DEFRA’s staffing was obtained by Friends of the Earth through a Freedom of Information request. The material shows a gradual erosion of staff working on the Adapting to Climate Change programme with 38 in 2009/10, 32.5 in 2011/12, and 23.5 in 2012/13. However, just six staff are funded for the next financial year following the publication of the National Adaptation Programme.

On economics he said: “The government may think it has a growth story. Nobody else does. If it would stop looking at low carbon growth in the way the Spanish Inquisition looked at heretics, it could find one in front of its nose. The economy as a whole bumps along the bottom. The low carbon economy keeps growing at nearly 4%.”

On International negotiations, Mr Ashton said “The next two years will be decisive, with a Summit next year, and a climax in the UN talks in Paris in 2015.” He continued “Nothing that we accomplished could have been accomplished if we had been faltering at home as we are now. You cannot expect others to act as you ask, or even listen to what you say, if you are not doing yourself what you want them to do.” 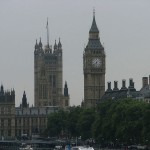 Houses of Parliament – by Mark Ahsmann

He also called for NGOs to be part of the movement to mobilise coalitions against climate change and provide people with solutions by filling “the gap that mainstream politics has vacated.”

“He has also set a provocative challenge to everyone who cares about our planet and environment to mobilise, offer tangible solutions and start to build a conversation with the public about what climate change will mean to them.”

In reference to the cut in staff at DEFRA, Andy Atkins added: “After a year that has already brought flooding and other extreme weather to the UK, it’s shocking that the department responsible for protecting us against the effects of climate change is to pare its staff to the bone.”