Forward Guidance: One Year On

A year on from Mark Carney’s decision to implement ‘forward guidance’, research from YouGov and Cebr shows that although there is not a great deal of recognition of what the term actually means, it has helped alter the narrative around interest rates. Most consumers believe that interest rates will rise in the next year.

The results emerge following YouGov/Cebr analysis last month, which indicated that the increase in consumer confidence has stalled, due to a decrease in optimism concerning house prices from homeowners. The figures show that for the second month in a row there has been a decline in the number of people who expect their houses to increase in value over the next 12 months. This indicates that increasing numbers feel that the house price growth seen over the last year will not be sustained.

The term ‘forward guidance’ may be well known among economists, but not for the general public. YouGov research shows only 4% of respondents say they know what it is and how it works, with a further 7% saying they know something of it. More than seven out of every ten consumers (72%) say they have never heard of the term.

Although people may not have known the term specifically, there is evidence that suggests that people are aware of the discussion concerning potential change in interest rates. Over the past 12 months since the announcement concerning ‘forward guidance’ there has been a notable change in expectations. In August 2013, YouGov/Cebr data indicated that 48% of people believed that interest rates would rise, compared to 83% who do at the beginning of August 2014.

Mark Carney announced changes to the forward guidance plan in February of this year, in order to assuage worries that interest rates were to rise as soon as unemployment shrank to 7%. YouGov’s ongoing programme of research with Cebr, which conducts over 70,000 interviews a year, revealed there was an initial levelling off in the number of people who expected interest rates to rise at this time. This levelling off then gave way to a sustained increase in the proportion of consumers expecting interest rates to rise. 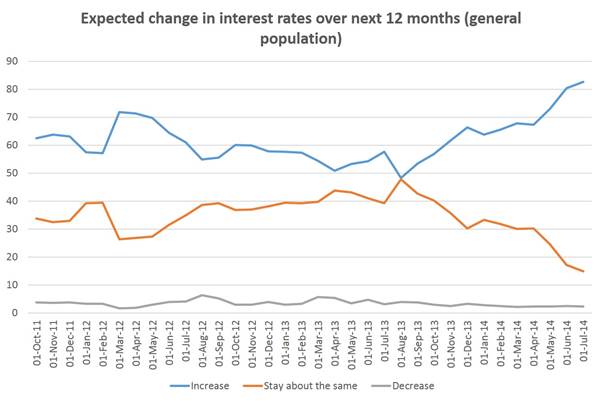 In terms of when people believe the Bank of England will increase the base interest rate in the next few years, of those that say they expect the rate to rise, three out of ten (30%) believe it will happen before the end of 2014. Whereas, more consumers (42%) believe the change will occur during the first half of 2015, with a further one in five (20%) saying it will be in the second half of next year. Only 4% thought it would take place in 2016. 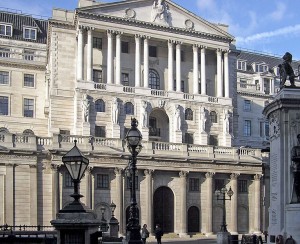 Indeed, a third (33%) believe they will be better off personally if interest rates rise, compared to 23% who say they would be better off if they fell. 28% say it would make little difference either way.

“Clearly, forward guidance has altered the discussion surrounding interest rates, with it now the case that over four in five believe that rates will rise in the next year.

Although consumers may not know the exact meaning of the term ‘forward guidance’, they are aware of news coverage of, and the debate surrounding, interest rates. As unemployment figures have improved, the spectre of increased interest rates has emerged.’’

Charles Davis, Director at the Centre for Economics and Business Research:

“Has Forward Guidance been a success? There is some evidence to suggest at first it helped to steady consumer expectations for interest rate rises a year ago. But incredibly few consumers know what on earth it is. More relevantly, most consumers now expect interest rates to rise as the economy has achieved sustained rapid growth and unemployment has plummeted.

The key question over the coming months is how Mark Carney and his colleagues go about tightening policy. The expectation is for careful, gradual increases in interest rates but even this is likely to stretch a significant portion of UK households. It’s remarkable that it’s been more than seven years since interest rates were on the rise – over the coming months this is finally going to come to an end. Consumers say they expect it but the proof of the pudding will be when rates actually start to rise.”

A Strong Brand Britain But Under Threat From Scottish Independence