Britain’s favourite ‘agony uncles’ are back dispensing ingenious advice in the latest instalment of Foster’s Good Call TV campaign. In the new 30 second ad called ‘Economy’, airing nationally from March 31st, Australian beach-dwellers Brad and Dan receive an emergency call from a pub’s patron in Cardiff whose mate “keeps talking about the economy on a guys’ night out.”

The duo instantly diagnose the caller’s mate with “GFC – Gentlemen’s Fun Crisis” and their caller is advised to invent a code word or sign to warn his mate “when he’s being a drongo”. Brad & Dan, as always, have a solution and give the caller a friendly tip to remind their mate to keep things light.

Dan goes on to explain such circumstances require the “Paddle of Rebuke” and when his beach hut partner Brad momentarily muses about the way “the volatility of the financial markets in developed economies affects us all”, Dan uses the opportunity to demonstrate the paddle’s effectiveness. 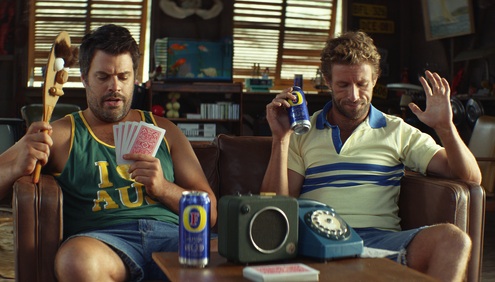 Gayle Harrison, Brand Director-Foster’s at brand owner HEINEKEN said: “The creative was inspired by research which shows that, as young men grow older and responsibilities increase, time spent socialising with friends becomes less frequent and more precious. They want to make the most of time together and they are genuinely horrified by the prospect of a mate wasting valuable time for pub banter by talking about subjects they regard as ‘serious, boring stuff’.”

The new advertisement will be shown in three campaign bursts running from March 31st -May 11, throughout this summer’s coverage of FIFA World Cup matches and from August 25th-October 12th.

Does Your Grip Strength Indicate How Long You Will Live?