With much talk of an increased demand for energy and of the future scarcity of it due to 'peak oil', many people had based their future plans on energy derived from hydraulic fracturing better known as 'fracking'.

Fracking (also known as hydrofracing, a frack job or frac job) is forcing pressurised liquid into rock or shale that contains gas. The hydraulic action then fractures the rock and releases the gas.

Just recently when remarking on seismic event in the UK in the spring, Cuadrilla Resources who explore for fracking resources in north west England [1], said "The hydraulic fracturing of Cuadrilla's Preese Hall-1 well did trigger a number of minor seismic events."

"The seismic events were due to an unusual combination of geology at the well site coupled with the pressure exerted by water injection as part of operations."

On top of that comes admissions in the US that fracking is linked to earthquakes. As far back as 1962 – 1966 the US army was involved in drilling a deep well to dispose of some liquids at the Rocky Mountain Arsenal but discontinued the practice as it was possibly "triggering earthquakes in the area".

As the oilprice.com piece by John Daly points out, until 2 years ago there were an average of some 50 earthquakes a year in Oklahoma, as of 2010 it was 1,047. And there are now 181 injection wells in Lincoln County Oklahoma. 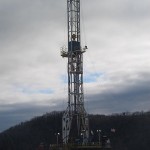 But there are those such as Tim Carr, West Virginia University's Marshall Miller Professor of Energy that dismiss this [2] saying that although it does cause 'micro-seismic' shifting, "These are much, much less than having a large truck go by. They are measured with sophisticated downhole tools and are used to map fracture stimulation treatments. No one could ever feel or even detect these events at the surface." Said Professor Carr.

This is because of the cocktail of water, proppants(sized particles that hold the fractures open) and chemicals that are used to cause the fracturing.

This has led to concerns about ground water pollution and there is also potential damage to air quality to be considered.

Although 99% of the fracking fluid is fresh water an average well will use up 5 million gallons of it over the lifetime of the well. But mixed with it can be known carcinogens like benzene [3] as well as poisonous elements like lead, antifreeze, methanol, and boric acid.

Benzene, which is also flammable and a 'notorious cause' of bone marrow failure, is already a top 20 chemical in the amount produced in the US, its production is rising and it is normally hard to get rid of. What better way than to dispose of it by giving it to someone else to inject it back into the ground to release energy? Whatever the environmental impact.

Fracking has also been known to emit between 3.6%-7.9% of the released methane (a greenhouse gas) directly into the atmosphere instead of gathering it.

So, on top of causing seismic events and releasing greenhouse gases into the environment, we have plenty of proof that things like lead and benzene used in fracking are not conducive to human health. But we still countenance their use in getting access to energy. Even if it means injecting them right into the ground that gives us our water to drink.

Voters Concerned About Cost of Living in 2014