There’s an investment opportunity in the making at one of the eurozone nations for U.S. investors, and it’s becoming more compelling each passing day.

We know the eurozone still burns. The economic slowdown in the common currency region still prevails. We have heard from the European Central Bank (ECB) that it’s still trying to work very hard to break the strength of the economic slowdown. The central bank has lowered the benchmark interest rate and hinted that it might go ahead with a form of quantitative easing. In the past, we also heard the ECB say it will do whatever it takes to save the eurozone.

You see, when the eurozone crisis began, the problems were contained to a limited number of countries, but now we see the economic slowdown spreading through the region; now, the stronger eurozone nations are falling prey to it. 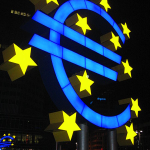 That isn’t all. Economic slowdown in the French economy is running deep, too. Industrial production is declining. In October, the industrial output in the French economy declined for the second straight month; it was down 0.3% in both September and October. (Source: “In October 2013, manufacturing output increased slightly (+0.4%),” National Institute of Statistics and Economic Studies web site, December 10, 2013.)

How does one actually profit from this situation?

As the economic slowdown in the French economy prevails, businesses in this eurozone nation will have troubles showing growth in their profits, and it won’t be surprising to see some register massive losses. As a result, their stock prices will decline—this is what’s creating the investment opportunity.

Why is it so compelling?

Please look at the chart below of the French CAC 40 index, the main stock index in the French economy, and pay attention to the circled area.

Not too long ago, French stocks dropped below their 50-day moving average (MA)—a signal that suggests bearish pressure is mounting. The last time that French stocks touched their 50-day MAs, they found support and moved to the upside. This time, they have broken below and seem to be declining.

Investors in the U.S. may profit from this situation by shorting exchange-traded funds (ETFs) like iShares MSCI France (NYSEArca/EWQ). This ETF tracks the performance of stocks traded on the French stock market, so shorting it would let investors profit from the downside.