A triptych painting of Lucian Freud by the late Francis Bacon has sold for £23 million at Sotheby's. 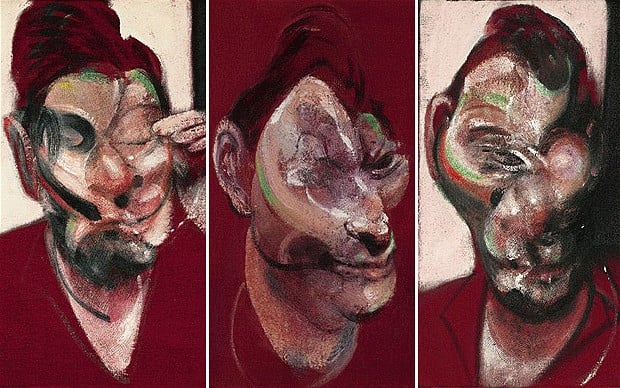 Three Studies For A Portrait Of Lucian Freud

The three-panel painting called Three Studies For A Portrait Of Lucian Freud which is a painting by Francis Bacon of his good friend Lucian Freud was sold to an anonymous buyer who is rumoured to be Cologne-based dealer, Alex Lachman.

According to a Sothesby's spokeswoman the sale of the painting attracted bids from 10 different people from across the globe and declined to reveal the buyer's identity.

Cheyenne Westphal, who is chairwoman of Contemporary Art Europe at Sotheby's, said "This striking painting has everything a collector in the current market is looking for".

"It is an artwork that radiates 'wall-power' with its brilliant colour and dramatic brushstrokes."

"It narrates one of the most impressive artistic relationships of the 20th Century between two titans of British art and is desirably fresh to the market having remained in the same collection for almost half a century".

Well she wasn't going to say its a load of rubbish was she?

However she is correct in her analysis but rather unimaginative. The painting has the stylised 'character within' expose trademark quality inherent in Bacon's portraits that sets him apart in his work.

Bacon could reach through the subjects physical exterior and merge it with the psyche of said subject in a powerful exhibition whilst maintaining a steady focus.

And yes it would look rather nice hanging up on a wall.