The most significant private collection of paintings and drawings by one of Britain’s greatest living artists, Frank Auerbach, goes on display at Tate Britain today. The works were collected by Lucian Freud throughout his life and hung in Freud’s house in London until his death in 2011.

Lucian Freud collected these paintings and drawings over many years, building what is thought to be the most important private collection of Auerbach’s work. Earlier this year, this collection was accepted in lieu of inheritance tax by HM Government and has been acquired for the nation by Arts Council England, to be allocated to public museums and galleries.

The works on display span Auerbach’s career from his student days in the late 1940s up to 2007. The artist has repeatedly returned to the same subjects over decades, constantly finding new and different ways to explore the indefinable qualities and raw sensations stimulated by the forms and structures he sees. The collection encompasses two subjects to which he has constantly returned – landscapes of London and portraits of friends and relatives of the artist who have sat for Auerbach for long periods of time. It also includes a group of five sketches, including birthday cards which show the friendship and respect that Auerbach and Freud had for each other. 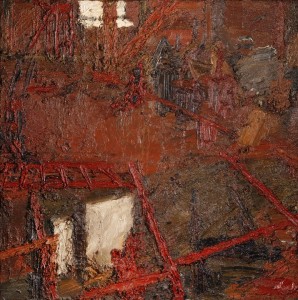 The portraits on display comprise works on paper of an intimate group of sitters, mainly of Estella (Stella) Olive West ('E.O.W.'), his principal model between the early 1950s and 1973, and his wife Julia. They include the celebrated charcoal Head of E.O.W. 1956 and Head of Julia 1985-86, another remarkable, larger than life drawing in charcoal and chalk.

Auerbach has painted landscapes primarily of north London and particularly Camden Town, where he has been living and working for the past sixty years. The display includes seven landscapes, such as Rebuilding the Empire Cinema, Leicester Square 1962 showing Auerbach’s interest in the rebuilding of London in the post-war years; and Mornington Crescent – Winter morning 1989, charged with the zigzagging energy of the moving clouds and bare trees.

Frank Auerbach was born in Berlin in 1931 and came to England in 1939. He studied painting at St Martin's School of Art, London, from 1948 to 1952, and attended David Bomberg’s drawing classes at the Borough Polytechnic. He studied at the Royal College of Art from 1952 to 1955. In 1986, at the XLII Venice Biennale, Auerbach was awarded the Golden Lion prize, shared with the German painter Sigmar Polke. Monographic exhibitions of his work have since been hosted at various prominent venues including Yale Center for British Art, New Haven (1991) the Royal Academy of Arts, London (2001) and the Rijksmuseum, Amsterdam (2013-14).,

In June 2015, a major retrospective of Auerbach’s work will open at the Kunstmuseum, Bonn, before travelling to Tate Britain in autumn 2015.

BP Spotlight – Frank Auerbach: Painting and Drawings from the Lucian Freud Estate is on display at Tate Britain until 9 November 2014. The display has been curated by Elena Crippa, Tate.