A child was sent to a Lincolnshire school with just a Smarties filled sandwich.

According to the Daily Mail Lincolnshire NHS workers were assessing what lunches pupils were sent to school with and found ‘…a wealth of youngsters were gorging on crisps, sweets and chocolate’.

This has resulted in calls for pupils’ diets to be changed, including a trial of free school meals.

With one in three children classed as obese Lincolnshire, says the Mail, has one of the country’s highest rates of childhood obesity.

Although she called the packed lunches ‘little boxes of love’ and that she didn’t blame the parents, Lynne McNiven, assistant director of public health, told the Express: “When we heard about the Smarties sandwich, it was horrifying. We went into the schools to have a look and found the children eating what I would class as picnics, the sort of lunch you might have once in a while as a treat, but this was every day, five days a week, 20 days a month. There was usually a sandwich, but white bread, lots of sweets, crisps and stringy processed cheese. Some of the fruit juices and fizzy drinks we saw have four teaspoons of sugar per helping, which is terribly unhealthy.”

A strange coincidence maybe that some of the offending articles she mentions can be found in TV advertising.

Then comes the really worrying bit: “Many of the children, even those at secondary school, were eating every- thing with their fingers and had never sat down to a formal meal when they had to use a knife and fork. One little girl didn’t even know how to use a spoon because all her meals were finger food at home.”

But at least there is some good news as she goes on to say that the schools where a healthier diet was introduced have found it to be a positive experience. It has also been proved that a good diet helps children with their studies.

Many people would baulk at the idea of universally free school meals, but has it not become obvious that for some reason many parents have failed their children in this regard? Maybe it’s because we as a nation have allowed good healthy food to fall off the national Radar in favour of additive filled rubbish? 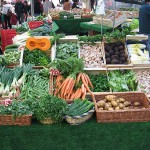 Just tut-tutting and blaming the parents but doing nothing about it condemns thousands of children to a life of obesity. It also condemns society to picking up the resulting healthcare tab for decades to come.

Acting now by introducing free school meals as well as putting diet in the curriculum may nip a future healthcare disaster in the bud. Especially as this is almost certainly not isolated to one area in the country.

It may actually also work out cheaper in the long run. And it would not cost anywhere near as much as bailing the banks out or going to war for example.

So, for all our sakes let’s do something really positive to sort this dangerous mess out.