Individuals who are genetically predisposed to obesity may be more susceptible to the adverse effects of eating fried foods, concludes a study published on bmj.com today.

The results show that eating fried food more than four times a week had twice as big an effect on body mass index (BMI) for those with the highest genetic risk scores compared with lower scores. In other words, genetic makeup can inflate the effects of bad diet, says an accompanying editorial.

It is well known that both fried food consumption and genetic variants are associated with adiposity (fatness). However, the interaction between these two risk factors in relation to BMI and obesity has not been examined.

So a team of US researchers, led by Lu Qi, Assistant Professor at Harvard School of Public Health and Brigham and Women’s Hospital and Harvard Medical School, analysed interactions between fried food consumption and genetic risk associated with obesity in over 37,000 men and women taking part in three large US health trials.

They used food frequency questionnaires to assess fried food consumption (both at home and away from home) and a genetic risk score based on 32 known genetic variants associated with BMI and obesity.

Three categories of fried food consumption were identified: less than once a week, one to three times a week, and four or more times a week. Genetic risk scores ranged from 0 to 64 and those with a higher score had a higher BMI.

Height and body weight were assessed at the start of the trials, and weight was requested at each follow-up questionnaire. Lifestyle information, such as physical activity and smoking, was also collected.

Among participants in the highest third of the genetic risk score, the differences in BMI between individuals who consumed fried foods four or more times a week and those who consumed less than once a week were 1.0 kg/m2 in women and 0.7 kg/m2 in men.

For participants in the lowest third of the genetic risk score, the differences were 0.5 kg/m2 in women and 0.4 kg/m2 in men.

The authors stress that their results may have been affected by other unmeasured or unknown factors, despite carefully adjusting for several diet and lifestyle factors. 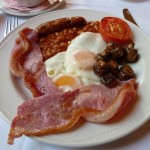 Professor Lu Qi said: “Our findings emphasise the importance of reducing fried food consumption in the prevention of obesity, particularly in individuals genetically predisposed to adiposity.”

“This work provides formal proof of interaction between a combined genetic risk score and environment in obesity,” write Professor Alexandra Blakemore and Dr Jessica Buxton at Imperial College London in an editorial. However, the results “are unlikely to influence public health advice, since most of us should be eating fried food more sparingly anyway.”

In contrast, they stress that genetic information can be very valuable for treating ‘monogenic’ forms of obesity, caused by changes in a single gene. They say that it would therefore be “a great shame” to assume that genetics can be ignored in the management of obesity, and call for further studies “providing clinically useful predictions for individuals and enabling stratification of patients for appropriate care and treatment.”

The psychology of the designer label

How to Add a Personal Touch to Your Living Room

Why you need to watch your digital footprint