Diamonds are known to be a girl's best friends. But now you can turn your best friend into a diamond.

LifeGem-Europe, based in Zundert, The Netherlands, has developed a process for turning cremated human remains, also pets, into diamonds that can be worn as jewellery.

According to Mr. Gerard Rokx, CEO of LifeGem-Europe, it took the company more than three years to develop and patent the process.

A thimbleful of ashes or a lock of hair can be turned into a diamond. At first they isolate the carbon from the cremated ashes. To convert a lock of hair into carbon requires subjecting it to high temperatures in an oxygen-deficient environment which is called 'Carbonation'. Meaning all other elements except carbon are completely eliminated.

The ashes are then first purified in a vacuum induction furnace at 3,000 degree Celsius. They are then placed inside a specially developed diamond synthesis press under intense pressure and heat, replicating the natural forces that create a diamond.

Mr. Russel Shor, senior industry analyst at the Gemological Institute of America, said "the result is a diamond with the same chemical and and optical properties as a natural diamond, with the difference that it is created in a laboratory."

Furthermore High Pressure, High Temperature Process is one of two processes used to create commercial synthetic diamonds, but it is the only one which can use carbon in this way.

It takes about twenty-four weeks to create a rough diamond. It is impossible to distinguish LifeGem diamonds from other synthetic diamonds.

The diamonds are available in the colours blue, red, green and yellow and even in shape cuts – round, princess or radiant. 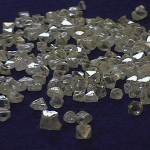 Mr. Rokx said that the diamonds are certified by the Gemological Institute of America and the company includes a lifetime guarantee against any defects.

"Until now," said Mr. Rokx, CEO of LifeGem Europe, "we sold 400 LifeGem diamonds most of them in the Netherlands."- The company offers its services worldwide through its partnership network with funeral homes and crematoriums.

Man-made diamonds have been manufactured from carbon since the mid-1950, when General Electric developed the process for making small diamonds for industrial uses.