In its final year as a single entity, the Financial Services Authority has stated in its business plan for 2012/2013 that it will look to address the issue of directors of failed banks moving banks to a similar job.

The FSA is due to split into Prudential Regulation Authority (PRA) and the Financial Conduct Authority (FCA) in 2013, but is moving to what it calls a ‘twin peaks’ model on 2nd April 2012 that will ‘reflect the shape’ of the new regime that comes into effect next year.

In their business plan for the year to April 2013, under the general heading of ‘delivering financial stability’, the FSA has said that it will be looking at options that allows the prevention of directors of failed banks from just quietly changing jobs to another financial institution as happened in the recent past.

“We are examining various options to make it easier to refuse an application for an approved persons status on the basis that the person’s previous role as a director of a bank that failed raises fundamental questions about their competence or general suitability to perform a similar role again. We plan to set these out in a Discussion Paper in the first half of 2012.” Says the document.

It looks like this will be part of the reform of prudential regulation as the Chairman of the FSA, Adair Lord Turner, says the FSA will be “…producing jointly with the Treasury a Discussion Paper on potential changes to the liabilities and incentives facing senior executive management and non-executive directors of major banks.”

The first question many people would be asking is why has it taken this long to get this particular ball rolling? And the second question would be will the new regulatory framework follow this through, or will it all be conveniently swept under the carpet during the re-organisation? 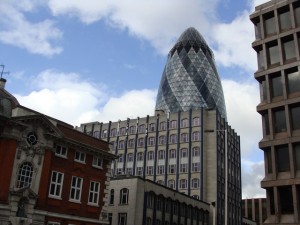 The Gherkin Building by Sarah Wetherell

The Work Place Pension ‘Snakes and Ladders’ in Small Business