According to the annual First Time Buyer Review from the Halifax, FTB mortgage affordability has improved to a 12 year high.

The report also says that:

• 40% of local authorities are affordable for FTBs, a sevenfold increase on 2007

• 95% of first time purchases are now exempt from stamp duty

The Halifax constructed the report using data from its own records as 'the UK's biggest provider of FTB mortgages' as well as data from the Office for National Statistics (ONS), the Council of Mortgage Lenders (CML) and the
Department for Communities and Local Government.

The report says that the proportion of disposable income that any potential FTB needs to set aside for mortgage payments has improved markedly from 50% in September 2007 to the current level of just 27%. This is the lowest proportion since December 1998.

There has also been an improvement in housing affordability as the number of Local Authority Districts (LAD) where houses are 'affordable' to the FTB has increased from only 6% to 40%. Bear in mind that in 2000 it was 82%. This is based on an affordability calculation where the gross average annual earnings (based in ONS 'Annual Survey of Hours and Earnings') for each LAD is multiplied by four and if this is greater than the average price paid for by a FTB in that area then that area is deemed 'affordable'. If a particular LAD gross average annual earning multiplied by four is below the area's average price paid for by a FTB then it is 'unaffordable'.

The number of FTB though has been declining in steps since 2000 (see graph). Even during the period of the mid 'noughties' when the housing boom was seen as at its peak the level of FTB was below the 2000-2002 level. 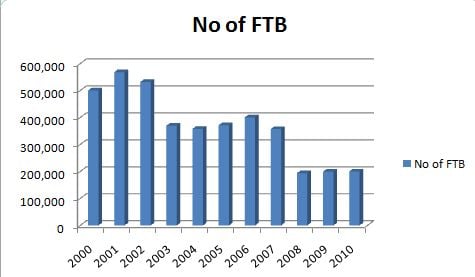 Although housing looks more affordable on paper one wonders with declining real wages and a continuing mortgage drought how affordable the market is in real terms. The average deposit is just below Â£29,000 at 69% LTV and the average age for FTB finding their own deposit has crept up to 36 while 80-85% of FTB under the age of thirty are getting financial assistance to raise the deposit.

At one end of a chain, whether of one property or many, there is usually a FTB (or relative buying for them) or an investor whilst at the other end is a death, debt, divorce or two single home-owners getting together. Without investors piling in the FTB is the only thing that will keep the market moving. There may be many potential FTB out there but probably not in sufficient numbers to reinvigorate the market quite yet.