The FTSE 100 has again hit an all-time high, breaking 7000 for the first time. With investment company performance linked so closely to stock market activity, how has the closed-ended sector performed since the record high in 1999? The Association of Investment Companies (AIC) has taken a look at the twenty top performing investment companies from the previous all-time high to the end of February 2015 (see table).

Sectors focused on the Asia Pacific region account for 30% (six of the twenty) highest performing investment companies. The top performing investment company between 31st December 1999 and 28th February 2015 was Scottish Oriental Smaller Companies, from the Asia Pacific – Excluding Japan sector, up an impressive 1191% over the 15 years and 2 months since the last FTSE 100 record high. Aberdeen Asian Smaller Companies, from the same sector, was the next highest performer, up 1079%. Aberdeen New Thai, from the Country Specialists: Asia Pacific sector was the fourth highest performer, up 955%.

Geographically focused sectors account for 75% of the 20 highest performing investment companies in this period. In the UK, Fidelity Special Values, from the UK All Companies sector, was up 537%, and Perpetual Income & Growth (UK Equity Income) was up 503%. Outside of the Asia Pacific, European Assets (European Smaller Companies) was up 463%.  JPMorgan Russian Securities (Country Specialists: Europe) was up 700%, but has seen difficult conditions recently.

The 1999 FTSE 100 all-time high was preceded by the dotcom bubble, but other specialist sectors have featured between 31st December 1999 and 28th February 2015. The Sector Specialist: Biotechnology & Healthcare sector features twice in the top twenty highest performing investment companies during this period, with Worldwide Healthcare up 800% and Biotech Growth up 607%. TR Property, from the Property Securities sector, was the third highest performer overall, up 1001%.

Annabel Brodie-Smith, Communications Director, AIC, said: “Over the last fifteen years, we’ve seen bull markets, bear markets and a serious recession. Despite all this, investment companies have ridden out the highs and lows of the stock market and delivered impressive returns over this fifteen year period.” 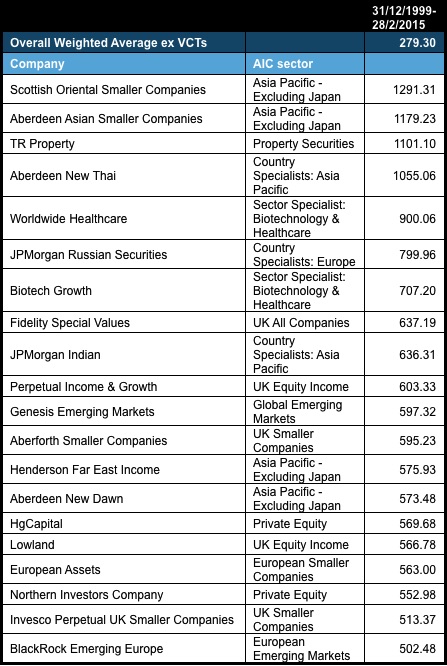