Latest research by one of the UK’s top 20 accountancy networks shows that the effective tax rate paid by FTSE-100 companies is now only 26% compared to 35.8% just two years ago.

And in better news for these companies says UHY Hacker Young the tax rate has dropped whilst the profits have increased.

This is in part down to the drop in the corporate tax rate in April this year when it fell from the previous 28% down to 26%.

But this steep decrease has also been partly caused by some British companies moving their headquarters to places overseas where the tax regime is even more favourable. 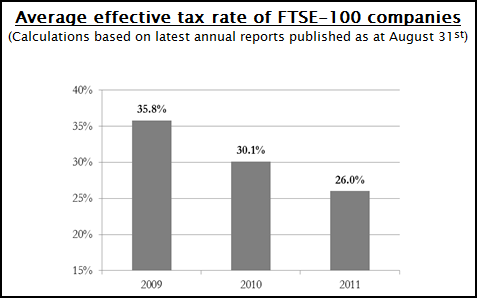 This leads to these companies obviously generating a higher percentage of their profits abroad allowing them to take advantage of the lower tax rates in those overseas jurisdictions.

Roy Maugham, Tax Partner at UHY Hacker Young points out that these companies are just meeting their duties to shareholders by limiting the tax burden and as such are doing nothing wrong.

“Companies have a duty to their shareholders to keep the tax they pay under control. With more of their operations now based overseas it is only sensible for them to ensure that their business is structured properly so that they are paying tax at the best rate. That doesn’t mean they are doing anything that is illegal or pushing the boundaries of acceptable tax planning. They may simply be reducing their activities in high tax overseas jurisdictions or controlling their non-allowable expenditure more effectively.” He said.

Shire, WPP and United Business Media all chose Dublin as the location for that purpose says UHY Hacker Young, although WPP has confirmed it is returning to the UK.

But another reason that companies move is uncertainty over tax rates, says UHY. “Tax uncertainty in the UK, particularly successive Government’s relentless tinkering with the tax system – as well as HMRC’s crusade to close tax avoidance loopholes in the past few years – have undoubtedly had an impact on the attractiveness of the UK as a place to conduct business.” Roy Maugham explained.

Concerns over the possibility of more companies moving offshore have led to the government looking at making the UK more attractive tax-wise says UHY.

As Roy Maugham commented “The tax burden is a vital consideration for highly mobile multinational companies when deciding where to be based. Whilst the Government has made efforts to make the UK tax regime more attractive, will it be enough to stymie the tide of British companies still thinking about the exit?”