The average effective tax rate paid by FTSE 100 companies has fallen to its lowest level since the recession, dropping to just 22.6% last year – down a quarter from 30.1% five years ago – reveals research by UHY Hacker Young, the national accountancy group.

UHY Hacker Young says that falling corporation tax rates and companies making maximum use of tax allowances are key drivers behind the decline.

The ‘effective tax rate’ is the average percentage at which overall company profits are taxed.

“FTSE 100 firms are seeing their tax bills dwindle as a percentage of profits.”

“The declining rate at which the UK’s largest companies are paying out tax is not going to play well with critics who are already up in arms over corporation tax ‘sweetheart’ deals with multinationals like Google.”

“However, this is less the result of rampant aggressive tax avoidance and more to do with changes to tax rates and reliefs, as well as profitability coming under pressure in some sectors such as pharmaceuticals.”

“Last year’s cut in corporation tax rates has fuelled the downward spiral, and this looks set to continue given that further decreases are planned in the next few years.”

The pharmaceutical sector had the lowest effective tax rate of 13.1% on average, after property and real estate companies which typically enjoy very tax efficient structures as REITs (1.9%). In fact, pharma has seen a sharp year-on-year decrease from 20.8% in 2014.

UHY Hacker Young says that although the Pharmaceutical sector has recently come under fire for transfer pricing, which opponents argue is a tool for tax avoidance, the decline the effective tax rate is more likely to be due to a reduction in profits at some major Pharma companies.

For example, AstraZeneca posted a 13% drop in its core operating profit in 2014. Its effective tax rate fell to 0.9% last year from 21.3% the year before.

[It adds that a recent increase in R&D tax credits for larger companies under the Research and Development Expenditure Credit from 10% to 11% could also be a factor.] 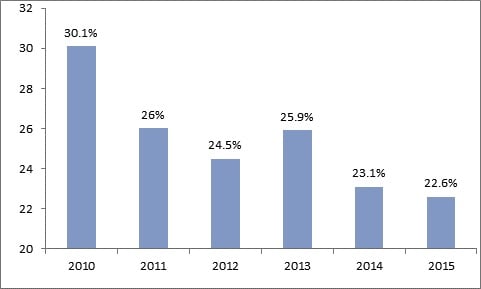 Barclays, Royal Dutch Shell and Fresnillo top the table, with other commodities giants Antofagasta and BHP Billiton completing the top five of companies with the highest effective tax rates.

UHY Hacker Young says that the Oil & Gas sector is starting to see some benefit from recent tax cuts for North Sea Oil producers, as the effective tax rate for the industry has fallen from 39.2% in 2014.

However Clive Gawthorpe says, “While the North Sea Oil tax cuts have offset some of the impact of the oil price collapse on profit levels, effective tax rates for corporates in this sector are still sky-high compared to the FTSE 100 average.

“With rock-bottom oil prices on the one hand and eye-watering effective tax rates on the other, the strain on the industry is enormous.” 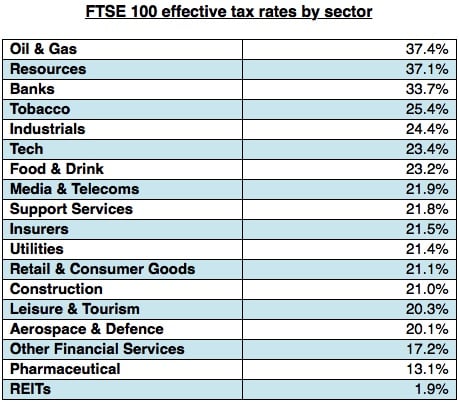