The Chancellor, George Osborne, dropped a bit of a bombshell yesterday in Treasury questions when he announced that the fuel duty rise planned for August would be delayed until next year.

The last Labour government had first planned this 3p rise in fuel duty (3.6p when VAT is added) into future budgets and George Osborne had left it in his own budget in March. Since then there has been a strong attack on the proposed increase by the industry as well as many commentators claiming that it would stifle the economy.

Labour’s Ed Balls, the Shadow Chancellor, is of course claiming this as yet another U-Turn and claimed a victory after he had called on the government yesterday morning to scrap this planned tax rise.

The Conservatives are claiming that this particular move had been under consideration at the top for some time. Pity ‘the quad’ of David Cameron, George Osborne, Nick Clegg and Danny Alexander had forgotten to inform their colleagues such as Transport Secretary, Justine Greening, who must be smarting after supporting the fuel duty rise scant hours before the announcement.

If it had been planned earlier, those plans would have included how it would be pre-announced, leaked and then made formal, i.e. how the government could make the maximum political capital out of it. They would not have wanted to send out the mixed political messages that they have. But at least they can say that they are ‘listening’ to the wishes of the people. And with influential people like the motoring advocate Quentin Wilson saying that it doesn’t matter how they came to the right decision as long as they do you can see the positives of the move. Of course die-hard Tory haters will just say it is a U-Turn leaving the budget in tatters, maybe it is.

There is also the question of why announce this now if fuel prices have actually fallen from about Â£1.38p in March to a current Â£1.33p?

But it does overshadow that earlier politically disastrous news that the nation’s net debt for May was nearly 18% higher than in May last year and that the income tax take had fallen by 7.2%. So the timing was nowhere near perfect, but it probably served a purpose.

Remember also that the claimed idea behind fuel duty (and the infamous escalator) is to get us to use less of the stuff. There are also climate driven targets to be met, overseen by our EU overlords. Surely this will put a great big hole in the whole green agenda leading to missed targets and fines etc? But of course that’s further down the road. 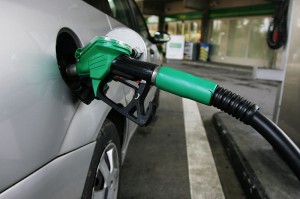 Image by Rama (Own work) [CC-BY-SA-2.0-fr (http://creativecommons.org/licenses/by-sa/2.0/fr/deed.en)], via Wikimedia Commons