August 8th sees Seth Troxler take over London's Tobacco Dock to pay homage to the UK's acid house history and heritage, inviting artists from all over the world who embody the true spirit of acid house in 2015. Via the warped mind of one of Detroit's most forward-thinking proponents of future house and techno and the coming together of dance music's finest, London prepares itself for the mother of all one-day warehouse parties.

Seth has invited some of the most exciting innovators of electronic music from across the world to play alongside him over 3 levels of the vast venue. Tobacco Dock will play host to the likes of The Martinez Brothers, Jackmaster, Skream, Craig Richards, Marshall Jefferson, Tom Trago, Harvard Bass and special guest DJ Harvey amongst many others who will be taking over the breath-taking venue for one day only.

East London's Tobacco Dock has quickly emerged as the capital's most talked about venue in London under the competent hand of LWE who transform this beautiful space into a mecca for electronic music. With 3 contrasting rooms of music, the venue offers a unique dynamic that you won't find anywhere else. The Great Hall has that big, main room, Balearic feel with exposed wooden beams that help to make you feel surprisingly close to the DJ in a room of this size. The Car Park is one of the best techno dungeon's you'll find anywhere and has already been filled with many unforgettable moments.

"Acid house, turned nightclubs back into what they were supposed to be all along: a place to dance." – The Guardian 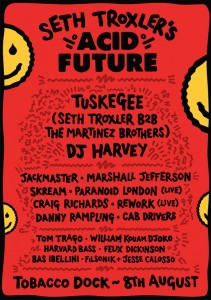 There is no denying that the summers of 1988 and 1989 marked the birth of a unified youth movement based around dance music which rapidly snowballed into the defining cultural phenomenon of the following decade. While disco, techno and house had been born out of mainly black margins in New York, Chicago and Detroit respectively, the UK-wide acid house movement threw all of these genres into a melting pot and gave birth to a sound and supporting attitude to dance culture that was uniquely British and was embraced across the nation. As British raving legend goes, the previous year Danny Rampling, Paul Oakenfold and Nicky Holloway went on holiday to Ibiza, had a musical epiphany while watching DJ Alfredo play at Ku, came home and started Shoom where acid house was born.

"Recently I've been quite outspoken about my misgivings on the rise of EDM and the culture that surrounds it – but I've also noticed that the UK and specifically London, possibly my favourite city in the world, doesn't have much of an EDM scene at all. This got me thinking as to why this might be and the simple answer is… acid house." – Seth Troxler

While this might be a heart-warming nugget of rave-folklore, they certainly weren't the only ones tuning in to the 303-driven strains of Chicago house defined by the likes of DJ Pierre, Ron Hardy, Phuture and Marshall Jefferson… Mike Pickering at been championing house music at the Hacienda in Manchester since the mid eighties, Ashley Beedle & 'Evil' Eddie Richards held court at Clink Street just down the road from Shoom throughout '88 and crews were simultaneously throwing proto-acid house raves in Blackburn up in The North. In short… from 1988 onwards, Britain was raving, and it's never looked back!

"First, we invite you to enter into a bye-gone era. A place where dance music was fresh and new. Where late nights turned into bright new days of inspiration and opportunity. You remember that first time you went to a party don't you? Your friends dragging you along…you, unsure if they might be crazy. As you approach an un-assuming warehouse, you hear the faint thumping of bass piercing the nights silence…" – Seth Troxler