The Bank has today published updated data on the use of the Funding for Lending Scheme (FLS). Today’s publication shows for each group participating in the FLS the amount borrowed from the Bank and the net quarterly flows of lending to UK households and businesses to the third quarter of 2013.

In the quarter ending 30 September 2013, 21 participants made FLS drawdowns of £5.5bn. This took the total amount of outstanding drawings to £23.1bn, with 33 groups now benefitting from funding under the scheme. One additional group joined the scheme in 2013 Q3, taking the total number of participating groups to 42.

Net lending by FLS participants was +£5.8bn over the quarter. This compares to lending of +£1.6bn in Q2, and is the biggest quarterly net lending flow since the FLS was launched (Chart 1 below) reflecting previous improvements in credit conditions beginning to feed through to loan volumes. Cumulative net lending since June 2012 by FLS participants has now become positive at +£3.6bn, an increase of 0.3% relative to the stock of loans as at June 2012.

The Bank and HM Treasury announced an extension to the FLS on 24 April 2013. This extended the scheme by one year to allow participants to borrow from the FLS until January 2015, with incentives to boost lending skewed towards small and medium sized enterprises (SMEs). Given the developments in household credit conditions, the Bank and HM Treasury announced on 28 November that the extension would be re-focused to support solely business lending in 2014. Lending to households in 2014 will no longer generate additional allowances. Allowances generated by lending to businesses in 2014, and by lending in 2013 – including lending to households – are unaffected by this change. The fee for all drawings from the FLS extension will be 25bps, to provide certainty over the availability of cheap funds to support positive net lending to small businesses in 2014.

Rates on new household lending have fallen markedly since mid-2012. There have been falls of more than 100 basis points in some representative mortgage rates, as shown in Chart 2 below. Rates on both unsecured and secured loans to households continued to fall or were broadly stable in recent months, and lenders responding to the Credit Conditions Survey expected further compression in most household lending spreads in Q4. Both gross secured lending and repayments have picked up strongly. And the number of approvals for house purchase continued to rise in October, indicating higher mortgage lending in future.

Small and medium-sized businesses (SMEs), however, frequently lack access to the capital markets and are therefore more dependent on banks for their external finance. Indicative median interest rates on new credit facilities to SMEs overall have fallen modestly since mid-2012. These rates do not, however, capture the full cost of credit facing SMEs, as they do not include the impact of fees or cashback deals. Furthermore, as lenders become more willing to extend credit to a wider pool of borrowers, falls in interest rates for some SMEs may be offset by banks charging higher interest rates to riskier ones. Surveys of small businesses show more of an improvement in the cost of credit to SMEs: for example, businesses responding to the Federation of Small Businesses (FSB) survey reported that, on average, their cost of credit fell between mid-2012 and 2013 Q2 and continued to edge lower in Q3 (Chart 3 below). Those surveys also suggest that the availability of credit has been improving over the past year or so, albeit from a low base. There has been increased SME lending activity consistent with this improvement in credit conditions and the economy overall. Gross lending in the three months to October was £1.5bn higher than the same period a year ago. But repayments have also risen, resulting in negative net lending.

Commenting on today’s data, Paul Fisher, Executive Director for Markets at the Bank of England, said:

“An economic recovery has taken hold. These data show that a significant improvement in credit conditions, aided by the FLS, is now feeding through to lending. But credit supply to businesses remains relatively subdued, especially to SMEs. The refocus of the FLS is designed to continue to support the recovery, where it is needed.”

Chart 1: Net lending by participating groups (a) (b) 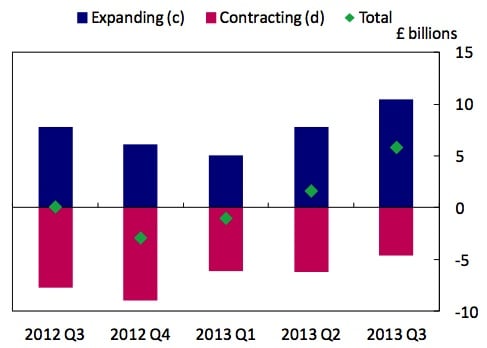 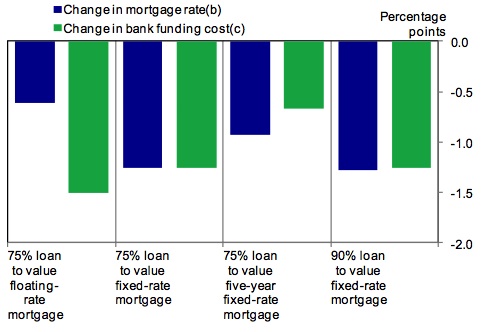 (a) Change between 30 June 2012 and 31 October 2013.
(b) Two-year 75% loan to value (LTV) mortgages unless otherwise stated.
(c) For fixed-rate mortgages, calculated as the sum of indicative UK bank secondary market bond spreads and the swap rate corresponding to the term of the mortgage. For floating-rate mortgages, three-month Libor is used in place of a swap rate. For more details see Chart 1.8 of the August 2013 Inflation Report.

Chart 3: Distribution of loan rates offered to small businesses (a) 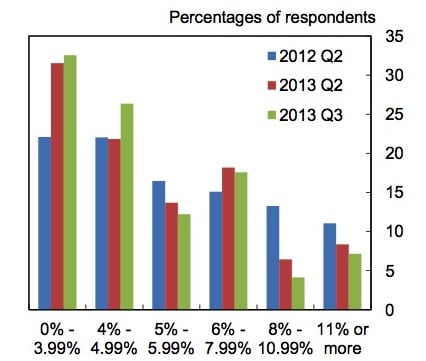 (a) Interest rates that small businesses that successfully applied for bank credit reported that they had been offered. Results have been re-weighted to exclude ‘unsure’ responses. For further details on survey methodology, see www.fsb.org.uk/frontpage/assets/q1%20vosb.pdf.