The Bank has today published updated data on the use of the Funding for Lending Scheme (FLS). Today’s publication shows for each group participating in the FLS the amount borrowed from the Bank and the net quarterly flows of lending to UK households and businesses eligible under the Scheme up to the second quarter of 2013.

In the quarter ending 30 June 2013, 18 participants made FLS drawdowns of Â£2.0bn, while one participant repaid Â£0.9bn. This took the total amount of outstanding drawings under the Scheme to Â£17.6bn, with 28 groups now benefitting from funding under the Scheme. Net lending by FLS participants over the quarter was Â£1.6bn, slightly stronger than in previous quarters, although net lending overall since the Scheme began remains broadly flat. One additional group joined the Scheme in 2013 Q2, taking the total number of participating groups to 41. The inclusion of that group has resulted in downward revisions to the data for total net lending by FLS participants in previous quarters, as shown in this table (click it to enlarge).

The FLS creates incentives for banks and building societies to boost their lending to the UK real economy by reducing their funding costs, which in turn allows them to reduce the price of new loans. Market funding costs have fallen significantly since the announcement of the FLS and this has reduced the incentive to draw on FLS funding for some participants. FLS funding remains a backstop source of funding for all participants should market conditions deteriorate.

Following the falls in funding costs, interest rates on mortgages and personal loans have fallen significantly since the start of the FLS, as shown in the chart below, with continued decreases in recent months. 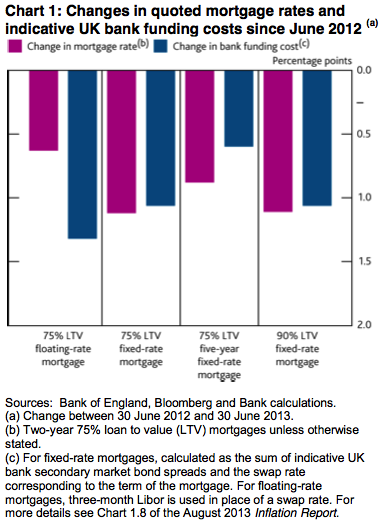 There is also evidence that the price and availability of lending to businesses has improved since the Scheme began and this trend has continued in recent months. A range of evidence suggests that credit availability has increased and the cost of credit has decreased for larger businesses. The picture for the conditions faced by small and medium-sized businesses is more mixed, but survey evidence from the Federation of Small Businesses suggests that the pricing of loans for small businesses was more favourable in 2013 Q2 than in mid-2012 as shown by the following chart. 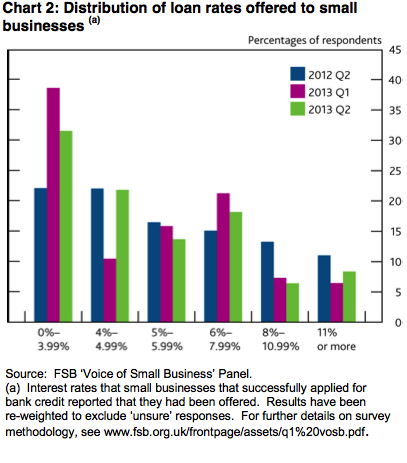 The aim of the FLS is to encourage more lending to the UK economy than would have been the case in the absence of the Scheme. In aggregate, net lending was broadly flat in Q2, continuing the trend seen since the Scheme was launched. That is likely to reflect several factors, including the typical lags between improvements in credit supply and higher lending volumes, as well as subdued credit demand. Prior to the launch of the FLS in July 2012, Bank staff judged that UK bank lending was more likely to decline than increase over the subsequent 18 months. Looking ahead, net lending is projected to pick up modestly over the second half of the year. Further discussion of the outlook for lending is available in the Inflation Report.3

The data published today show that in 2013 Q2, lending by FLS participants (Â£1.6bn) was slightly stronger than the aggregate net lending figure published for Q2 (-Â£2.1bn – see Chart below), in large part because net lending by non-FLS participants was negative in Q2. The data also reveal differences in net lending volumes across FLS participants. As in previous quarters, some large groups’ net lending has been constrained by the desire to reduce their so-called ‘non-core’ loan portfolios, in order to repair balance sheets and, for some, to comply with State Aid conditions. These constraints are likely to ease for some of these banks in future. 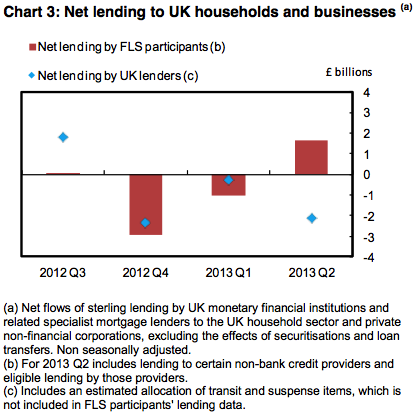 There have also been differences in lending across different sectors of the economy. Aggregate net lending to individuals has been positive recently and picked up slightly in 2013 Q2. And mortgage approvals for house purchase – which tend to lead net mortgage lending by a few months – edged higher in Q2, suggesting that lending to individuals is likely to increase further.

Aggregate net lending to businesses remained negative in 2013 Q2. Within the total, lending to large companies was weak. But this is likely to partly reflect the continued use of alternative forms of finance by larger companies, who are better able to access capital markets. Net corporate bond issuance in the first half of 2013 was robust.

Net lending to small and medium-sized enterprises (SMEs) was also negative in 2013 Q2, but the growth rate was less negative than for large companies.4 Going forward, SME credit conditions should be supported by the extension to the FLS announced in April, which provides additional incentives for participants to increase lending to SMEs both this year and in 2014.5 A large proportion of FLS participants have indicated their intention to participate in the extended Scheme.

The extension to the Scheme also gave FLS participants the option to include lending involving certain non-bank providers of credit to households and businesses within their lending figures for the last three quarters of 2013. Two groups have chosen to activate this option – these are denoted by an asterisk in the usage and lending data table.

Commenting on today’s data, Paul Fisher, Executive Director for Markets at the Bank of England, said:

“The FLS is continuing to support lending to the UK economy with a range of indicators suggesting that credit conditions are steadily improving for households and firms, and FLS participants collectively expect net lending volumes to pick up over the remainder of this year.”

Blanket Ban on Prisoners Voting is Against Their Human Rights

CHART OF THE WEEK: The Productivity Gap