It's almost 10 years (1st Decemeber 2003) since using a mobile phone while driving was banned yet nearly half (48%) of motorists admit to being distracted by phone calls and texts while driving, with 22% checking social media accounts behind the wheel.

Overall, a study by leading UK insurer Zurich found that 80% of drivers feel more at risk on Britain's roads today, compared to ten years ago.

The research also found that a rise in the number (according to RoSPA) of cyclists on Britain's roads is contributing to drivers feeling at risk, with almost a third (34%) of motorists blaming them as the number one distraction 'outside of their control.'

When asked about the roads themselves, motorists said they feel most at risk when navigating unknown roads (76%), with many regularly distracted by complex signs (61%), speed cameras (55%) and roundabouts (39%). 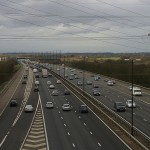 The Institute of Advanced Motorists (IAM) director of policy Neil Greig said: "Driving on UK roads has never been so distracting; gadget overload and the rise of complex road systems has meant that concentration is less and roads are trickier to read. With an increase in cyclists, there is another major risk factor in play too."

Zurich car insurance expert Phil Ost added: "While the rise of mobile technology has made it easier for us to communicate on the move, it's also making our lives feel busier. Staying safe is far more important than staying in touch. Turn off your gadgets if you think you might be tempted to check them while driving. Plan your journey well in advance and don't just rely on the satnav – make sure you've checked the route yourself before setting off on your journey."