The action by Notcutts, Hillier, Squires and Blue Diamond, which between them operate 60 garden centres across the UK, follows similar moves – revealed last month by Friends of the Earth – by DIY superstores B&Q, Homebase and Wickes.

Concern about the impact of neonicotinoid pesticides on bee populations has risen sharply in recent months. Last month the European Commission proposed restictions on three neonicotinoid chemicals following a report by the European Food Safety Authority.

Friends of the Earth is urging people to contact their local garden centres to ask them to remove products containing neonicotinoid pesticides. 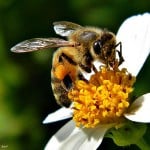 Friends of the Earth's Head of Campaigns Andrew Pendleton said:

“It’s great to see garden centres across the UK heeding the warning from European safety experts and pulling pesticide products linked to bee decline from their shelves.

“The approach of leading retailers stands in stark contrast to the Government’s reluctance to back European efforts to safeguard bees from pesticides.

"With bee numbers plummeting Environment Secretary Owen Paterson must take urgent action to safeguard these crucial pollinators by backing a ban and introducing a bee action plan to tackle all the threats they face.”