Gazumping is back already

Who'd have thought it but that evil real estate practice of 'gazumping' is back already despite the economic mire the country is in.

Through out the UK most people would have thought that gazumping would be dead and that the reverse procedure of 'gazundering' would be prevalent.

Gazumping is usually expected in a rising market where a new buyer comes in late with a better offer, which the seller accepts leaving the original buyer high and dry with costs unless he can better that later offer. This does not happen in Scotland die to their house purchase laws.

Gazundering is expected in a falling market where the buyer threatens to pull out at the last minute unless the seller reduces the price substantially.

Both practices seem immoral to many whose word in their bond.

Even though the country is in the financial doldrums, introducertoday reports that the top end of the London market has seen surge in activity due to a combination of city bonuses, foreign buyers and a rush to beat the new top rate of land value stamp duty of 5% on £1 million plus properties coming into force on 6th April.

The chief executive of Marsh and Parsons, Peter Rollings said "With over 14 buyers registering for every property placed on the market in central London, competition among buyers has undeniably heated up. The arrival of the bonus season, and those hurrying to buy high-end property before the stamp duty hike in April, have bolstered demand. Bidding wars are emerging on desirable prime homes, and there has been a noticeable increase in gazumping. Vendors are now in such a strong position that many are accepting bids higher than initial offers from interested rival parties, particularly in areas like Kensington and Notting Hill. Buyers can no longer afford to drag their heels, and must move quickly to ensure they secure their desired property."

"There are a lot of people who do have cash to invest, who are piling it into bricks and mortar." He added. 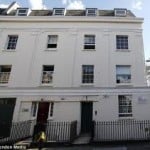 Jack Greenwood, a property buying agent who works for those looking to purchase high end properties said that a 'tipping point' had been reached where every buyer should use an agent and that Central London property had now truly become a global commodity. With one in four properties now being sold 'off market' he said that competition was intense.

What truer indication of the state of wealth non-distribution on the planet than this. Not just a two tier property market, but two completely different markets that may as well be antipodes apart.

Even the value of Number 10 Downing Street has dropped