You may not have seen it but some malicious, brainless little thug enticed a squirrel to the edge of a canyon then in a hideous act of animal cruelty he kicked it over the precipice – a video was then posted onto Youtube by a bystander who claimed to not be part of the event.

In a quest to identify this alleged Frenchman and get him punished, PETA UK and its US and French affiliates are offering a reward of up to £10,000 ($16,870) for information leading to the arrest and conviction of this callous ***** (insert your own word(s)).

The group has also warned that animal abusers such as this are a serious threat to the whole community and this behaviour can escalate unless it is quickly stopped. So, if you know him and anyone else involved, do the right thing and shop them! You'll get a reward too.

"It is imperative that any community faced with a sadistic and violent act such as this take measures to find the culprit or culprits and bring them to justice. Animal abusers are a danger to everyone – they take their issues out on whomever is available to them, human or non-human, and must be caught before they act again." 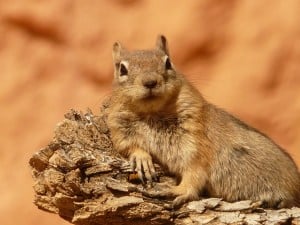 Anyone with information about this case is encouraged to contact Grand Canyon Chief Ranger Bill Wright on +1 928-638-7888.