Data released today shows UK local authorities have invested £14 billion of their pension funds into fossil fuels. This is the first time that the £231 billion investments of all 418 local councils have been broken down and released publicly. The data ranks local councils by their fossil fuel exposure and reveals both the financial threat to pensions and the climate risks.

“Public investments in fossil fuels are fuelling dangerous climate change, and present a threat to the pensions of 4.6 million public sector workers. There’s a strong ethical and financial case for local councils to divest from fossil fuels and reinvest into infrastructure fit for the 21st century.” – Danni Paffard of 350.org.

The data and online map released by 350.org, Platform, Community Reinvest and Friends of the Earth ranks councils by their fossil fuel investments, and allows residents to see what their local council has invested into. The data suggests councils are failing to properly manage the financial risks of investments in fossil fuels nor take responsibility for climate action. 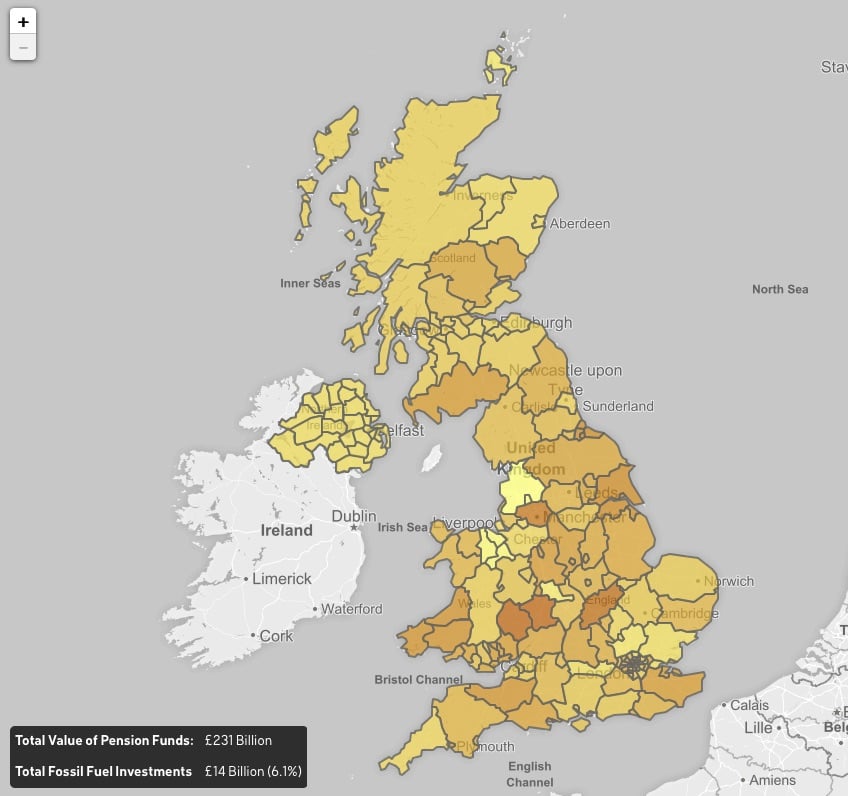 • Over 6% of local government pensions are invested in fossil fuels. Merton (11%), Worcestershire (10.7%) and Camden (9.5%) have especially high exposure.

• Three quarters of direct fossil fuel shareholdings are in only ten companies, headed by BP and Shell.

Reinvesting the £14 billion of fossil fuel shares into local infrastructure could enable UK councils to safeguard pensions and generate sustainable returns by:

“Instead of wasting £14 billion of public pensions on multinational climate wreckers, we could reinvest into renewables and housing that serve local residents, create jobs and safeguard pensions.” – Mika Minio of Platform.

12 new local campaigns calling for their council to divest from fossil fuels will also launch today, adding to the 18 existing initiatives. Oxford and Bristol City Councils have already taken a lead in making fossil free commitments, joining 50 cities internationally and larger institutions like the Norwegian Government Pension Fund. There are 389 institutions globally that have committed to divest.

“Most of the world’s oil, coal and gas has to stay in the ground to prevent runaway climate change. Local government can help protect all our futures by taking pension investments out of these planet-wrecking corporations.” –  Simon Bullock , senior climate and energy campaigner at Friends of the Earth.

“Local residents and pension-holders won’t be happy that their money is funding climate change. Today we’ll be calling on Greater Manchester to stand on the right side of history and divest from fossil fuels.”  – Ali Abbas, Friends of the Earth Manchester, launching a campaign today targeting the Greater Manchester Pension Fund.

Campaigns to divest have been boosted by increased awareness of the financial risks to investors of ‘stranded’ fossil fuel assets, associated with (but not exclusive to) the need to leave 80% of known fossil fuel reserves unburnt to prevent catastrophic climate change. The Bank of England and G20 Financial Stability Board are currently investigating the risk to the economy of the ‘Carbon Bubble’. A recent analysis found that California's public pension funds, CalPERS & CalSTRS, incurred a combined loss of over $5 billion in the last year alone from their holdings in the top 200 fossil fuel companies.

“There is a growing body of evidence suggesting that the financial risks associated with climate change will impact investment portfolios. If pension fund trustees fail to properly manage these risks in their investment decision-making process, and there is a consequential decline in value of the pension pots of members, then trustees and investment managers could be sued for breaching their fiduciary duties.” – Natalie Smith, Lawyer of Client Earth.

In March 2014, following a clarification from the UK Law Commission on the interpretation of fiduciary duty, the Local Government Association (LGA) (England & Wales) published a legal opinion on how fiduciary duties affected the scope for a Local Government Pension Scheme (LGPS), concluding that “the precise choice of investment may be influenced by wider social, ethical or environmental considerations, so long as that that does not risk material financial detriment to the fund.”

Why Google Is Still a Bargain at a Grand a Share